Chasing 346 to win, India Red were all out for 334 in the final over after their middle and lower order brought them mighty close to the huge target. 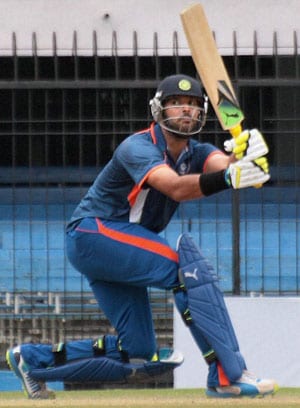 Yuvraj Singh bludgeoned his way to a 53-ball 84 and gave the national selectors another timely reminder of his worth even as Abhishek Nayar slammed a 39-ball 75 not-out to take India Blue to the final with a 11-run win over India Red in the NKP Salve Challenger Series here on Friday.

Sent into bat, India Blue posted an imposing 345 for four before bowling out the opposition for 334 in 49.5 overs at the Holkar Cricket Stadium.

The match was as good as over for India Red with the Yusuf Pathan-led side needing 38 in the last two overs. However, Umesh Yadav and Shabhaz Nadeem hit a flurry of boundaries to nearly lead their side to what would have been an improbable win.

They collected 15 runs off Bhuvneshwar Kumar to bring the equation down to 23 of six balls. R Vinay Kumar was smashed for a six and a four before Umesh Yadav lost the steam.

Earlier, both Yuvraj and opener P Akshat Reddy scored 84 runs each, but the left-handed skipper enjoyed a strike rate of over 150 as he toyed with the India Red bowlers hitting 11 boundaries, including five sixes.

Reddy's knock came off 96 balls and was studded with five fours and two shots over the fence.

Nayar then tormented the rival bowlers with his fiery unbeaten knock that came off a mere 39 balls, and had a strike rate that was close to 200.

Yuvraj and Nayar plundered 151 runs in just 13 overs in their fourth wicket partnership, which ended with the former's run out in the last over of the innings.

Yuvraj now has one century and three half-centuries in his last five matches. He was handed a lifeline by the BCCI by including him in the India A team for the series against the West Indies A.

India Red skipper Yusuf Pathan's decision to invite the Blues to bat seemed all right as they had kept the rival batsmen under a tight leash and had also scalped Naman Ojha cheaply at the start.

However, their joy was shortlived as Reddy found a good partner in Manish Pandey, who contributed 70 off 86 balls with the help of seven fours and two sixes.

The duo put the side batting first in the driver's seat with a mix of determined and fearless batting. They raised a 143-run stand for the second wicket, setting the stage for Yuvraj and Nayar to rip apart the bowlers in the slog overs.

The two batsmen hammered the bowlers all around the park as India Blue scored 162 runs in the last 15 overs. Nayar hit six fours and four sixes in his knock.

None of the Red bowlers could make an impact and pacer Suraj Yadav was the most expensive as he bled 84 runs in his 10 overs.

Chasing a formidable total, India Red gave a good account of themselves but fell short after a fighting effort.

Abhinav Mukund top-scored with 83 off 86 balls, hitting nine fours and a six.

Smit Patel made 67 but retired hurt after facing 83 balls while striking six fours. Kedar Jadhav smashed 49 off 40 balls with the help of five fours and a six.

The chase only got difficult when Yusuf Pathan made a hasty exit, falling to Yuvraj for 1. Ishank Jaggi (34) led a spirited lower-order resistance but the target proved to be a little too much for them.