After Unmukt Chand's ton took Delhi to 342 for 6, India Red were all out for 230 inside 41 overs. Delhi will now face Yuvraj Singh's India Blue in the Challenger Trophy final on Sunday. 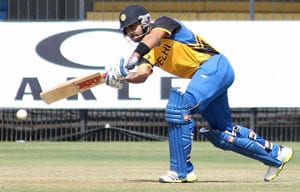 The immensely talented Unmukt Chand again showed his ability to rise to the occasion as his stroke-filled century guided Delhi to the final of the NKP Salve Challenger series with a thumping 112-run win over India 'Red' in the last round robin league match here on Saturday.

The Virat Kohli-led side will meet Yuvraj Singh's India 'Blue' in the final of the tournament.

Courtesy Unmukt's 119 and skipper Virat Kohli's useful 63, Delhi piled up a huge total of 342 for six in 50 overs after being put into bat. Milind Kumar with 52-ball-57 and Rajat Bhatia with an unbeaten 19-ball-40 also beefed up the score in the end.

In reply, India 'Red' were all-out for 230 in 40.1 overs with Gurkeerat Singh (83) making an effort to resist the inevitable.

However Virat Kohli was in his fluent self as he hit 63 off only 55 balls with five fours and two sixes -- one each of off-spinner Yusuf Pathan and left-arm spinner Shahbaz Nadeem.

At the other end, Unmukt launched into India pacer Umesh Yadav (9-0-85-1), who had a horrible day in office, spraying the ball all over the place. He played some flowing cover drives but was also not afraid to play the lofted stroke. He hoicked Abhimanyu Mithun for couple of sixes -- one over mid-wicket while the other was straight over bowler's head.

Sandeep Warrier who bowled to a tight line initially wasn't spared either as he was slashed over extra cover for a six.

Unmukt-Kohli duo added 93 runs for the second wicket before the Delhi skipper was stumped by Smit Patel trying to hit a second successive six off Nadeem. The Jharkhand slow bowler managed to hold his own with figures of 2/54 from 12 overs, as others leaked runs.

Once Kohli was gone and Sehwag also followed suit, it was Milind who joined Unmukt as the duo added 120 runs in 17.3 overs before both were dismissed. Milind hit five fours and a six during his knock.

The reply was a difficult one and Robin Uthappa (7) was dismissed quickly trying to flick one from Nehra over square leg. Smit Patel played to a wrong line off a Nehra delivery to get clean bowled. Abhinav Mukund (64) tried to resurrect the innings but consumed far too many (87 deliveries) in the process.

Comments
Topics mentioned in this article
DEL Saurabh Tiwary Unmukt Chand Virender Sehwag Gautam Gambhir Ishank Jaggi Virat Kohli Cricket Yusuf Pathan Abhishek Nayar
Get the latest updates on IPL Auction 2023 and check out  IPL 2023 and Live Cricket Score. Like us on Facebook or follow us on Twitter for more sports updates. You can also download the NDTV Cricket app for Android or iOS.