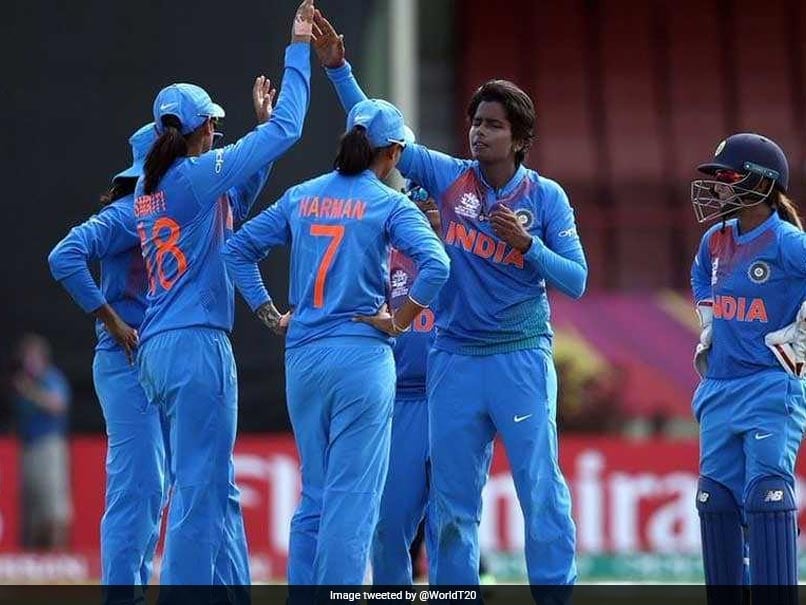 All-round India defeated Ireland to enter the semi-finals of the ICC Women's World T20. Chasing a target of 146 runs, the Irish side could only manage to score 93 for 8 in 20 overs. For India, Veteran Indian opener Mithali Raj (51) scored her 17th half-century as India posted 145/6 in the Group B match at the Providence Stadium in Guyana. Asked to bat, Mithali Raj and Smriti Mandhana (33) forged a 67-run opening wicket stand to get India to a good start. Later, Jemmimah Rodrigues (18) and Deepti Sharma (11 not out) scored quick runs to help India post a decent total. For Ireland, Kim Garth was the pick of the bowlers, returning figures of 2 for 22. India, who are currently on a two-match win on a trot will qualify for the semi-final if they can manage to defeat the Irish side.
(Play fantasy league and win cash daily)

23:50 IST: We leave you with all the highlights from the match, until next time, it's goodbye!

23:45 IST: India qualify for the semi-finals, beat Ireland 93/8 in 20 overs by 52 overs. Third victory on a trot for the Harmanpreet Kaur-led side.

India qualify for the @WorldT20 semi-finals!

Ireland are beaten by 52 runs - India will battle Australia for the top spot in Group B on Saturday!#INDvIRE scorecard and highlights https://t.co/9yRD2FnjHq#WT20 #WatchThis pic.twitter.com/uIIdPCeqZT

23:40 IST: Team hat-trick for India, Lara Maritz departs for duck. She was completely deceived by Radha Yadav on that occasion as she registers a three-wicket haul.

23:39 IST: Run-out! Mistimed call from the batswomen, they ran the first one hard, couldn't judge the second one well. Richardson departs for 4.

23:31 IST: WICKET! Isobel Joyce tries to play the paddle sweep from the delivery by Harmanpreet Kaur, finds Poonam Yadav inside the circle. She departs for 33, as the Irish side lands themselves further in trouble.

23:28 IST: WICKET! Good review by India after the on-field umpire suggested it was not-out but the ball tracker shows the ball pitched outside off, pitching in line and hitting the stumps. Shauna Kavanagh departs for 2, Ireland 82/4 in 16.4 overs.

23:23 IST: Boundary! Isobel Joyce dances down the track to hit the delivery from Deepti Sharma straight down the ground for four runs. The Irish side will need more of this if they want to remain in contention to win the match.

23:17 IST: STUMPED! Laura Delany departs for 9 after the delivery from Radha Yadav spun away from her and she failed to pick up the length. Ireland 71/3 in 15 overs, need 75 runs in 30 balls.

22:56 IST: STUMPED! Clare Shillington dances down the ground but the delivery from Poonam Yadav spun away from her. Ireland lose their second wicket for 42 runs. Skipper Harmanpreet Kaur to bowl the 10th over.

22:46 IST: Boundary! Clare Shillington smashes the delivery from Poonam  Yadav to find the fence towards deep mid-wicket, she reaches her 1,000 T20I runs with that boundary!

22:40 IST: WICKET! Deepti Sharma provides India with their first breakthrough as Gaby Lewis departs for 9, Ireland 27 for 1 in 5.1 overs. Isobel Joyce is the new batter in.

22:37 IST: Boundary! Clare Shillington smashes the full-toss from Mansi Joshi to the fence. Ireland 27 for no loss after 4.4 overs, need 119 runs to win.

22:34 IST: Boundary! Juicy full-toss from Radha Yadav and Clare Shillington smashes the ball towards off side to find the fence. Ireland 20/0 after 4 overs, need 126 more runs to win.

22:21 IST: Boundary! First four for Ireland, comes from the bat of Gaby Lewis. Brilliant front foot pull shot. Ireland 5/0 after 1 over. Radha Yadav to bowl the second over from the other end.

22:18 IST: Irish openers Clare Shillington and Gaby Lewis walk out in the centre. Young Mansi Joshi to begin the proceedings for India.

22:05 IST: End of innings - India manage to score 145 runs at the loss of six wickets against Ireland.

Mandhana and Raj got off to a fast start before Ireland struck back with six wickets, limiting India to 145. Will it be enough? Join us shortly for the chase in Guyana!

21:57 IST: WICKET! Mithali Raj edges the delivery from Garth as the wicket-keeper takes a straight forward catch. India 133/5 in 18.3 overs, Deepti Sharma is the new batter in.

21:52 IST: WICKET! Veda Krishnamurthy departs for 9 as India lose their fourth wicket for 127 runs. Brilliant piece of bowling from Lucy OReilly to find the blockhole.

21:45 IST: WICKET! Harmpreet probably got a bit carried away on that one, and pays her price. She was looking to find the fence from the full-toss delivery by Richardson. India 116/3 after 15.3 overs.

21:43 IST: SIX! Harmanpreetkaur dances down the ground to hit a maximum over long-on.

21:38 IST: STUMPED! Jemmimah Rodrigues dances down the ground as the wide delivery from Laura Delany does the trick. India lose their second wicket for 107 runs in 14.3 overs. Skipper Harmanpreet Kaur is the new batter in.

21:35 IST: Boundary! Jemmimah Rodrigues finds the boundary from a delivery by Lara Maritz as India reach the 100-run mark in 13.5 overs.

21:32 IST: Boundary! Mithali Raj opens the face of the bat and hits the short delivery from Laura Delany towards the fence. India 94/1 after 13 overs.

21:28 IST: Five byes, Lucy OReilly misses everything as the ball goes past Mary Waldron to find the fence. India 87/1 after 12 overs.

21:18 IST: WICKET! Smriti Mandhana was looking to go over the top, missed the delivery from Kim Garth completely as it rattles the stumps. India 67 for 1 after 10 overs. Jemmimah Rodrigues is the new batter in.

21:16 IST: Boundary! Slower ball from Kim Garth, Mithali Raj knows there is no one there at the boundary, just makes a deft touch to find the fence.

21:10 IST: Boundary! Mithali Raj opens the face of the bat, guides the ball to the vacant area. India 56 for no loss after 8 overs.

21:05 IST: SIX! Smriti Mandhana walks down the ground to hit her first maximum of the match, India reach the 50 run mark in the seventh over.

21:01 IST: Boundary! Beautiful cover drive from Mithali Raj, finds the gap as well. India 38 for no loos after 5.5 overs.

20:59 IST: Boundary! A juicy full-toss from Lara Maritz to Smriti Mandhana, she does full justice to hit the ball to the fence towards deep mid-wicket.

20:57 IST: SIX! Mithali Raj smashes the first maximum of the match, she middled the delivery from Richardson. India 27/0 after 5 overs.

20:54 IST: Boundary! Smriti Mandhana steps up to hit Richardson for a boundary, a beautiful lofted shot from the Indian opener to get her third boundary in the match.

20:48 IST: Dropped! Mithali Raj dropped on 3 by Lara Maritz at square leg, India 13/0 after 3 overs. Bowling change for Ireland, Kim Garth to bowl the fourth over. She will be looking for the breakthrough here.

20:43 IST: Boundary! Smriti Mandhana nudges the ball behind point to find the fence, she used the width provided by OReilly well there.

20:40 IST: Boundary! Poor delivery from Richardson, Smriti Mandhana picks it well to score the first four of the match. India 6/0 after 1 over. Pacer Lucy OReilly to bowl from the other end.

20:34 IST: Indian openers Smriti Mandhana and Mithali Raj walk out in the centre, off-spinner Eimear Richardson to begin the proceedings for Ireland. Big for Team India, it they win, they are through to the semi-final. It will also be for the first time after 2010, if India can manage to do that.

20:28 IST: Both the teams have arrived in the centre, we head for the national anthem.

20:05 IST: Both India and Ireland have arrived in the stadium. We will be heading for the toss within a few minutes from now.

India and Ireland arrived at Providence Stadium under gloomy skies, but the good news is that the covers are now off and we should be ready for the scheduled start of play at 11:00am local #WT20 #INDvIRE pic.twitter.com/fipwq6DKIW

20:00 IST: Update: Rain has stopped, the skies have cleared, a prompt start is expected.

19:40 IST: Check out what Indian skipper Harmanpreet Kaur had to say as we head closer to the all important clash.

We certainly saw that in her innings against New Zealand!

She hit an awesome century in the first game of the tournament, and now Harmanpreet Kaur is ready to attack the rest of the competition. #WT20 | #WatchThis pic.twitter.com/cOpplUgX5d

19:28 IST: It's drizzling at the Providence Stadium in Guyana. Not good signs early on!

Not a great start to the day! #BackingGreen #WT20 pic.twitter.com/52Z8mOhfZ8

18:00 IST: Hello and welcome to the live commentary from the ICC Women's World T20 Group Stage match between India and Ireland.

Going into Thursday's match, India will be desperately hoping for their opening batter Smriti Mandhana to come up with a big score. After failing in the opener, Mandhana got off to a decent start in the second tie, but eventually failed to capitalise on it. While Harmanpreet and Mithali are expected to form the backbone of the Indian innings, the team management will be hoping to give enough match time to the likes of the other batswomen in Veda Krishnamurthy, stumper Taniya Bhatia and Dayalan Hemalatha before the tournament enters its business end.

Ireland Women Live Score Live Cricket Score Live Blogs Cricket
Get the latest updates on ICC T20 Worldcup 2022, check out the Schedule and Live Score . Like us on Facebook or follow us on Twitter for more sports updates. You can also download the NDTV Cricket app for Android or iOS.