Samit Dravid followed in his father's footsteps and scored a big century. 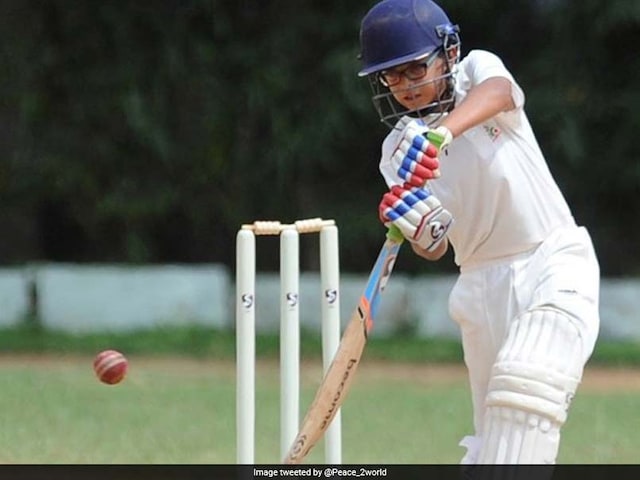 Known as 'The Wall' of Indian cricket, Rahul Dravid dominated the 22 yards for more than one-and-a-half decades. He hung up his cricketing boots in 2012 and it was predicted that the void left by the legendary batsman will be hard to fill. But, it seems that Dravid Jr is already preparing himself for the big stage. Playing in the Karnataka State Cricket Association's (KSCA) BTR Cup Under-14 tournament, Rahul's son Samit scored a match-winning century and guided his team Mallya Aditi International School to a huge 412-run win over Vivekananda School. Samit scored 150 runs in his team's victory.

Samit's knock came just a day before his father Rahul's birthday. The Under-19 team coach Dravid is currently in New Zealand for the World Cup.

Samit is not the only one who is following his father's footsteps. Aryan Joshi, son of former India cricketer Sunil Joshi, scored 154 runs and stitched a solid partnership with Samit to take their team to a mammoth 500/5 in 50 overs. He was the top-scorer in the team.

After Samit and Aryan heroics, the bowlers skittled Vivekananda School out for a paltry 88 to give their team a massive win.

Samit has been a consistent performer in the Under-14 category. Representing Bangalore United Cricket Club (BUCC), he scored 125 against Frank Anthony Public School in the Tiger Cup cricket tournament. His innings was studded with 12 boundaries.

He was also adjudged the best batsman at the U-12 Gopalan Cricket Challenge tournament in 2015.

Sunil Joshi, who played 15 Tests and 69 ODIs for India, is currently in Bangladesh as their spin bowling coach.

Comments
Topics mentioned in this article
India Cricket Team Rahul Dravid Sunil Joshi Cricket
Get the latest Cricket news, check out the India cricket schedule, Cricket live score . Like us on Facebook or follow us on Twitter for more sports updates. You can also download the NDTV Cricket app for Android or iOS.