As Kolkata Knight Riders scripted a sensational turnaround to win the Indian Premier League, captain Gautam Gambhir hailed his team for bouncing back after five successive defeats in the early days of the seventh edition. 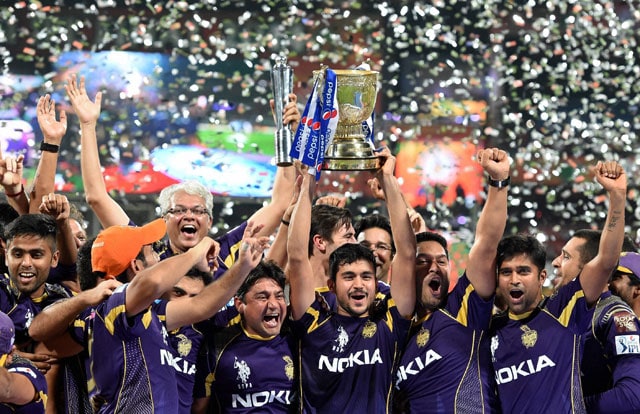 The Knight Riders had got off to a good start, winning their first two games, but they then lost five on the bounce before winning nine straight games to create an all-time IPL record. (Pandey, the Man for KKR)

"A lot of credit needs to go to the team because after the first seven games (2 wins and 5 losses), a lot of people had written us off and they did not think we would be here, lifting the trophy. The players absorbed the pressure very well," Gambhir said at the post-match presentation ceremony. (Match Report | Scorecard | Highlights)

Chasing 200 in a final can be daunting, even for a star-studded Knight Riders line-up but Gambhir revealed his team had the belief to do it, given the small size of the Chinnaswamy Stadium. Big scores had been chased down on this ground before and those successful chases would have been on the mind of every Kolkata player as they set out to chase history. Kolkata are now the second team besides Chennai Super Kings to have won the IPL twice.

"This is a ground very difficult to defend and that's why we believed that we could chase down 200," said Gambhir.

"Manish played very a fantastic innings and Yusuf chipped in as well," he said.

Gambhir also lauded Piyush Chawla for his crucial six off Mitchell Johnson off the last ball of the 19th over, leaving KKR with just five runs to win off the last over.

Meanwhile, Kings XI Punjab, who won 11 of their 14 league games ended up on the wrong side against Kolkata for the second successive game and this time it happened despite a sensational 55-ball 115 not out from Wriddhiman Saha.

But skipper George Bailey said he was proud of his team for the way they played this entire season.

"We've got a very, very special bunch of guys and our guys can hold their heads high. We've seen some absolutely fantastic cricket in both countries (UAE, India) and I can proudly say that I was part of such a great final. Our players can indeed hold their heads high," said Bailey.

Unlike the one-sided final last year between Mumbai Indians and Chennai Super Kings, this one went down to the fire, and Bailey said this game was worth the final of a big tournament.

This IPL has of course yielded positives for both finalists. While Gambhir and Orange Cup winner Robin Uthappa were recalled into the India side for forthcoming international tours, Punjab's Akshar Patel (who was also named Emerging Player of the Tournament) bagged his maiden national call-up after finishing with 17 wickets in the tournament.