Himachal Pradesh Cricket Association was taken over by the state government on Sunday in a midnight coup and cricket official Anurag Thakur has vowed to take the matter to court. The government action led to a delay in the start of HP's Ranji Trophy tie against Goa. 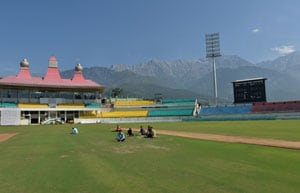 The turmoil in the Himachal Pradesh Cricket Association notwithstanding, IPL franchise Kings XI Punjab is keen to continue holding some of its league matches here, state Chief Minister Virbhadra Singh has stated.

The HPCA, which was headed by opposition BJP MP Anurag Thakur, was taken over by the Congress-led state government on Sunday.

"The officials of Kings XI Punjab have already approached us and shown their willingness for staging IPL matches in Dharamsala next season, and the government will fully cooperate with them," Singh said while addressing a press conference in here at the end of his five-day tour of Kangra district.

"Kings XI Punjab is a private body and has got nothing to do with the HPCA, they take the ground on rent every year to stage the matches here and they will be allowed to do so next year too," he said.

Singh said HPCA's membership should be opened to the locals.

"We are not against any sports organisation but we wish that such organisations in the state should run democratically.

"I was told that the Himachali members were not allowed to vote in HPCA's elections. The voters are non Himachalis and are life members, inducted by one man to suit his choice," said the Chief Minister.

"Government will not allow corruption, nepotism and land grabbing. All sports bodies in the state should work in a democratic manner. We are not against anyone, if the present HPCA President is re-elected in a democratic way, we shall agree to it too," Singh added.

HPCA was taken over by the state government on Sunday in a midnight coup and Thakur has vowed to take the matter to court. The government action led to a delay in the start of HP's Ranji Trophy tie against Goa. But Singh justified the action. "...hundreds of crores of the government land given for cricket upliftment, if used for personal benefit shall not be tolerated.

"Law was broken in such a way that if one digs out the vacant land of Hotel Pavellion (in the HPCA premises) in Dharamsala, one will find so many full size green trees cut down and dumped their to create space for hotel, in the land which was given for players hostel," he alleged.

"BCCI hasn't objected to our action till date. I don't think the BCCI is against it. If the government can give land worth crores to a private body, it has the right to take it back if misused. We have done nothing wrong," he added.

Comments
Topics mentioned in this article
Cricket Yuvraj Singh HP Kings XI Punjab
Get the latest updates on IND vs NZ 2021, check out the Schedule and Live Score . Like us on Facebook or follow us on Twitter for more sports updates. You can also download the NDTV Cricket app for Android or iOS.