King of sixes, Yuvraj Singh, is back with a bang

Yuvraj Singh hit 7 sixes and 8 fours in his 89-ball 123 to help set up India A's 77-run win over West Indies A in the first unofficial ODI in Bangalore. 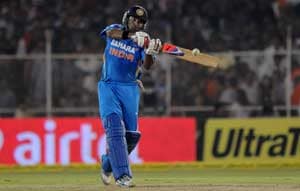 Yuvraj Singh is back to doing what he does best, hitting sixes and fours with utter disdain! Out of the Indian team since the final ODI against England in January this year, the India A skipper sounded the first bugle to the national selectors by hammering a 89-ball 123 against West Indies A in the first unofficial ODI in Bangalore on Sunday.

His swashbuckling knock helped India A pile up 312 for 4 in a rain-reduced 42-overs-a-side-game at the M Chinnaswamy Stadium, Bangalore. The host side earned a 77-run win after bowling out West Indies for 235 in 39.1 overs. (Read match report)

Yuvraj hit as many as 7 sixes and 8 fours in a showcase of lusty hitting en route his 18th List-A hundred. The veteran of 282 ODIs with 8211 career runs was pleased as a punch after finding timely form.

"I am very happy with the way I played and am glad that we won," he said after the match. The 31-year-old Punjab middle order spent six weeks in an intense training session in France in order to get his body back in shape and if his exploits on Sunday were anything to go by, he surely is back.

"Feels good to be getting back to my normal fitness. I'm happy with the way I was hitting the ball, it turned out be an absolutely amazing knock," he said in a relieved tone.

Talented top order batsman Mandeep Singh, also Yuvraj's Ranji teammate in Punjab, scored a composed 67 of 78 balls and shared a solid 100-run stand with Yuvraj, who walked out to bat at No.4. Out of favour Baroda all-rounder Yusuf Pathan matched Yuvraj with his big-hitting and hammered 70 runs of 32 balls (6 sixes and 4 fours) in a 55-ball 125-run stand. Yuvraj, talking after the match, stressed the need of a good start.

"We needed a good start, since these are fresh wickets in the beginning of new season. Robin Uthappa and Mandeep were good in the starting overs that set our game-plan. Our target was to reach a total of around 250-260, but we got more than 300," Yuvraj added.

The second match of the three one-day series is on Tuesday and Yuvraj feels there are few areas that the India A side, that includes a host of fringe players, can improve on.

"Bowling with the new ball we can work on, also bowling at the death we will have to improve on. Hopefully we will put up a better performance in next game," he concluded.