Kevin Pietersen Autobiography is a Work of Fiction: Graeme Swann

Kevin Pietersen has made shocking revelations in his autobiography, mainly 'targeting' former coach Andy Flower and Matt Prior. England spinner Graeme Swann though has hit back at KP. 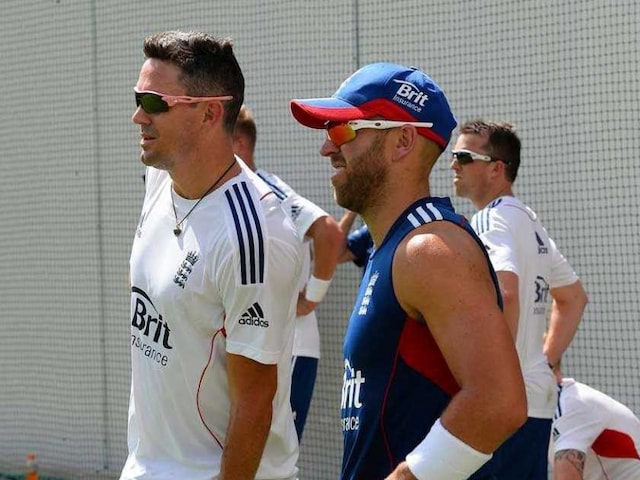 In happier times: File photo of Kevin Pietersen with Matt Prior (R).© AFP

Kevin Pietersen is making foes by the dozen and England spinner Graeme Swann is the latest to slam his former teammate. Dismissing Pietersen's autobiography -- KP: An Autobiography -- as a 'work of fiction,' Swann minced no words in criticizing the 'disclosures' made by the batsman.

On Monday, Pietersen had revealed that there was a fear factor which reigned supreme in the English dressing room under former coach Andy Flower. He had gone on to describe wicketkeeper Matt Prior as a 'bad influence who picked on players." Swann though rubbished the strong attempts at character assassination.

"I immediately realised it was codswallop when I read the character assassination of Matt Prior. Tragically I don't think Kev realises the one person who fought tooth and nail to keep him in the side is the one person he is now assassinating: Matt Prior." (Also read: Pietersen has no way of returning to England team: Nasser Hussain)

Swann also countered allegations of bullying in English cricket. "If that was the case a lot of people would have flagged it up before," he said and added that it was Pietersen who was targeting players he felt won't answer back.

"Kevin has been quite clever because the guys still playing he has left alone and he hopes to get back in again one day. He has picked on people who he thinks can't answer back."

Not all 'targeted' by Pietersen however have chosen to remain silent on the matter. Prior on Monday took to Twitter to promise a counter. "Obvs sad to see the accusations against me this am and I WILL have my right of reply! However today is not the day and Twitter is not the place for it!" he wrote on the micro-blogging site.

1/2 Obvs sad to see the accusations against me this am and I WILL have my right of reply! However today is not the day and Twitter is not..

Interestingly, while Pietersen was axed from the England side earlier this year, Prior too has not played for the national team since July due to bad form.

On-field form though is not as much of a concern for England fans as Pietersen's revelations may turn out to be.

Comments
Topics mentioned in this article
England Cricket Team Kevin Pietersen Graeme Swann Matt Prior Cricket
Get the latest Cricket news, check out the India cricket schedule, Cricket live score . Like us on Facebook or follow us on Twitter for more sports updates. You can also download the NDTV Cricket app for Android or iOS.