Steve Tikolo has replaced Robin Brown, who stood down after the side's failure to qualify for next year's ICC World Twenty20 championships in Bangladesh. 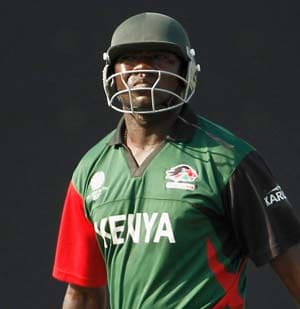 Former skipper Steve Tikolo has been named as Kenya's interim cricket coach, replacing Robin Brown, who stood down after the side's failure to qualify for next year's ICC World Twenty20 championships in Bangladesh.

Zimbabwean Brown, who joined the team's coaching staff as director of elite development last year, tendered his resignation on Monday, along with team skipper Collins Obuya and Tikolo was brought in.

The 42-year-old Tikolo was recalled from international retirement in October to help boost the team's performances.

"Obuya has opted to step down as the team captain but will continue to offer his services as a player," Cricket Kenya administrative officer David Pamba told AFP.

"Young batsman Rakep Patel has been named the new captain, as Kenya seek to rebuild the team for the future," Pamba added.

Kenya finished 11th at the World Twenty20 qualifying tournament in Dubai last month, and were subsequently beaten by Afghanistan in the World Cricket League as they tried to qualify for the 2015 World Cup finals in Australia and New Zealand.

However Kenya still have a chance of qualifying for the World Cup during next month's qualifiers in New Zealand, where only two places will be up for grabs to join Afghanistan, Ireland and the 10 Test teams at the 2015 finals.

Comments
Topics mentioned in this article
Cricket West Indies Cricket Team Netherlands Kenya Collins Obuya Steve Tikolo
Get the latest updates on IPL Auction 2023 and check out  IPL 2023 and Live Cricket Score. Like us on Facebook or follow us on Twitter for more sports updates. You can also download the NDTV Cricket app for Android or iOS.