Fifties from both Kaushal Silva and Dimuth Karunaratne helped Sri Lanka end day two of the third Test against England on 162/1. Earlier, Jonny Bairstow's magnificent hundred guided England to 416 in their first innings Jonny Bairstow continued a brilliant year of run-scoring with a Test-best 167 not out against Sri Lanka at Lord's on Friday.

But the debate about whether Bairstow should continue to keep wickets for England intensified when he dropped a routine catch to reprieve Dimuth Karunaratne on the second day of the third Test.

Kaushal Silva was 79 not out and Kusal Mendis was unbeaten on 25 after left-handed opener Karunaratne got out on 50.

Considering the start of this series saw Sri Lanka become the first side since 1958 to be dismissed for under 120 in three successive Test innings, this was a fine effort, albeit a placid pitch and lack of swing meant conditions at the "home of cricket' favoured batsmen on Friday.

There had been signs of recovery in their last innings, where Sri Lanka made 475 in a nine-wicket defeat in the second Test, giving England an unassailable 2-0 lead in this three-match series.

Karunaratne should have been out for 28 on Friday when he nicked all-rounder Chris Woakes, only for Bairstow to drop the two-handed waist-high chance.

Even allowing for the possibility that Bairstow was mentally and physically tired after his more than six-hour innings, and that the ball "wobbled" a touch before reaching him, it was still an extraordinary miss by a Test keeper.

It is not the first time this series that Bairstow has grassed a chance -- although Friday's miss was the most glaring.

Karunaratne cashed in and after tea struck James Anderson, the world's number one ranked Test bowler, for three fours in as many balls, including a well-hit drive.

Yet having completed a 95-ball fifty, Karunaratne was dismissed when a leg glance was well caught by a diving Bairstow to give under-pressure fast bowler Steven Finn a wicket on his Middlesex home ground.

Silva took Sri Lanka to 150 with a sublime drive through extra-cover for four off Stuart Broad. 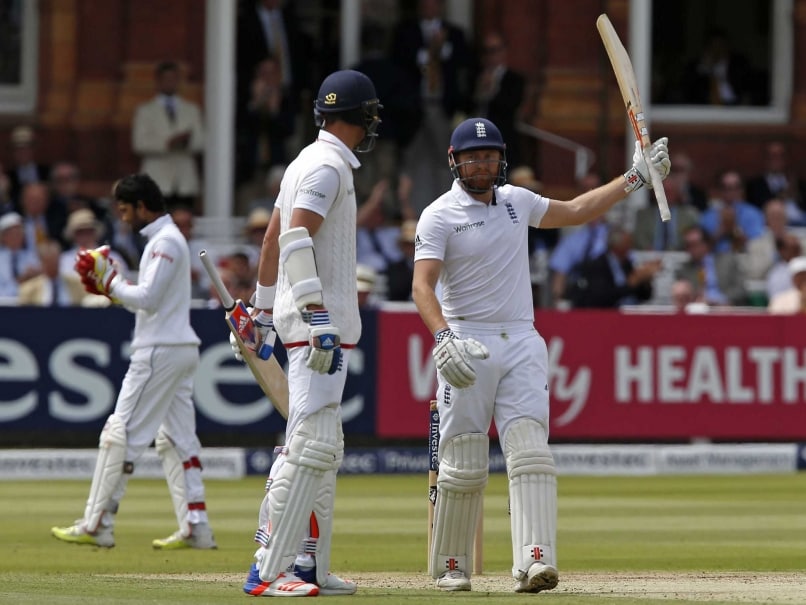 Jonny Bairstow (R) shared a 144-run partnership with Chris Woakes to guide England to a brilliant total of 416.

It wasn't until January that the 26-year-old Bairstow -- himself dropped on 11 when Shaminda Eranga floored a routine catch at mid-wicket -- scored his first hundred in Test cricket.

But since January 1 he has been in prolific form with the bat for both county champions Yorkshire and England, scoring 594 runs at an average of 118.8 in Tests and 1,127 runs in first-class cricket at 102.4.

Friday saw Bairstow receive good support from Woakes (66) in a seventh-wicket partnership of 144.

England resumed on 279 for six with Bairstow 107 not out and Woakes unbeaten on 23.

Bairstow's second century of the series, following his 140 on his Headingley home ground in the first Test, helped rescue England from the depths of 84 for four.

Woakes was the initial aggressor on Friday and a boundary off Eranga saw him to a maiden Test fifty in 102 balls.

But Woakes fell when caught and bowled by Herath off a chipped drive.

Bairstow batted on and his leg-glanced four off Sri Lanka captain Angelo Mathews saw him surpass his previous Test-best 150 not out against South Africa at Cape Town in January.