Watch: Kashvee Gautam Claims All 10 Wickets In Chandigarh vs Arunachal Pradesh Under-19 Match

Kashvee Gautam etched her name in the record books after claiming 10 for 12 in an Under-19 domestic one-day match. 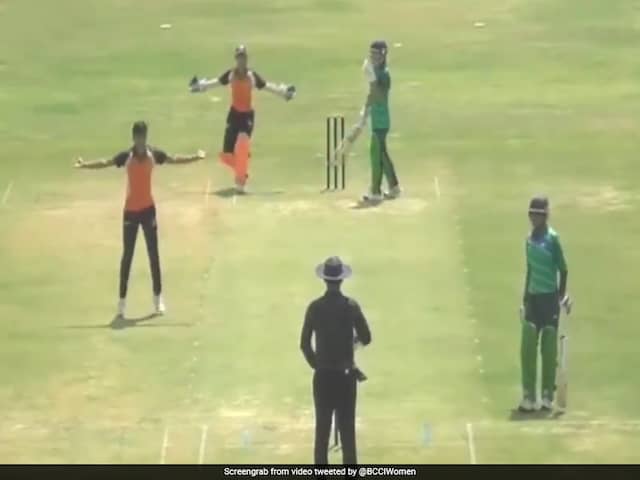 Kashvee Gautam also led the charge with the bat, scoring 49 off 68 balls.© Twitter

Kashvee Gautam, captain of Chandigarh U-19 team, etched her name in the record book as she picked up all 10 wickets in a Women's Under-19 One-Day Trophy match against Arunachal Pradesh at KSRM College Ground, Kadapa on Tuesday. Kashvee returned with the figures of 10/12 in her 4.5 overs, including a hat-trick in her second over. Before impressing with her bowling skills, Kashvee also led the charge with the bat, scoring 49 off 68 balls, which helped Chandigarh post 186/4 in stipulated 50 overs. The Board of Control for Cricket in India (BCCI) informed the fans about Kashvee's massive achievement on Twitter. "Kashvee Gautam 10 WICKETS! (4.5-1-12-10), Arunachal Pradesh 25/10 #U19Oneday," tweeted BCCI women.

Defending a modest total of 186 runs, Kashvee began the attack with the new ball and picked up two wickets in her first over, with both the players failing to get off the mark.

In her second over, she added three more wickets to her tally off successive deliveries, thus completing her five-wicket haul. All three wickets fell on last three balls of the over.

Kashvee's next over produced two more wickets as Chandigarh took complete control of the game. These two wickets meant that Arunachal Pradesh were seven down before they could reach the double-digit mark.

The medium-pacer wound up the match in style in her next over, removing remaining three players in the 9th over of the innings as Arunachal Pradesh bundled for a meagre 25/10 to suffer a huge 161-run defeat.

Eight Arunachal Pradesh batters could not even get off the mark, out of which four fell off their very first ball. Interestingly, none of the fielders were involved in any of the dismissals as all the batters were either cleaned up or got out leg before.

For Arunachal Pradesh, Megha Sharma was the only player who just about managed to breach the double-digit mark, scoring unbeaten 10 runs.

The extras of eight runs, six wides and two leg byes, conceded by Chandigarh was the second top-scorer for Arunachal Pradesh.

Apart from Megha, opener Nabam Martha and bowler Nabam Para were the other two players who were successful in getting off the mark, managing scores of four and three respectively.

In international cricket, only two players have managed to achieve this incredible feat and former India leg-spinner Anil Kumble is one of them.

England off-spinner Jim Laker was the first bowler in history to pick all 10 wickets in a Test innings in 1956 against Australia, while Kumble achieved this feat in a Test match against arch-rivals Pakistan in Delhi in 1999.