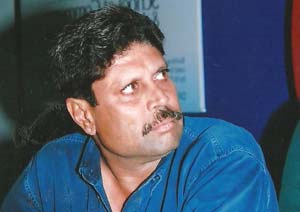 Meanwhile, media reports quoting a Hindi TV channel say that Kapil corroborated the fact that dawood did visit the Indian dressing room. "Yes, I remember a gentleman walking into our dressing room in a game in Sharjah and wanting to talk to the players," Kapil said.

Incidentally, former BCCI secretary Jaywant Lele, who died last month in Baroda, had also mentioned the incident in his book, 'I was There -- Memoirs of a Cricket Administrator'.

In one of the chapters in his book, he had written: "If the Indian team becomes champion here, I shall present a Toyota car to each team member, including officials, at their doorsteps in India."

Dawood, reportedly, had told Lele and the then India team manager Dyaneshwar Agashe to meet the wealthy industrialist in Sharjah.

"As bad luck would have it, India lost the tournament. Australia were declared champions on the basis of a higher run rate, as Australia, England and India earned equal points! After the results were declared most team members were not in tears, but that man was!" he wrote.

"After a long gap, we came to know that the man who met us in Sharjah in 1987 was Dawood Ibrahim, the alleged mastermind of the dastardly Mumbai blasts in 1993," Lele wrote.

Sharjah's cricket charm began to wane in the 1990s when match fixing scandals broke out, and although nothing was ever proved, sides started to move away. In 2001 the Indian government banned the national side from playing there. Between April 2003 and February 2010, the venue hosted no international games.

Comments
Topics mentioned in this article
Cricket Ramlal Nikhanj Kapil Dev Dilip Balwant Vengsarkar
Get the latest updates on India vs South Africa and check out  Schedule, Results and Live Score. Like us on Facebook or follow us on Twitter for more sports updates. You can also download the NDTV Cricket app for Android or iOS.