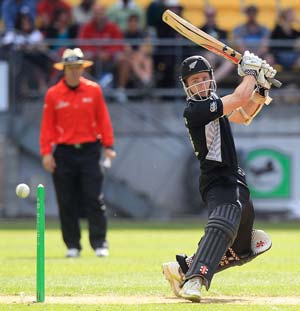 Batsman Kane Williamson and fast bowler Kyle Mills were omitted on Tuesday when New Zealand's one-day squad was trimmed from 14 to 12 players for two Twenty20 cricket internationals later this month against the West Indies.

Edgar said, "We are keen to keep this group together but mindful of the strong performances from a number of other players. We are fortunate to be in a position to have a range of quality players to choose from."

New Zealand leads the five-match one-day series 2-1 heading into the last match at Hamilton on Wednesday.

Comments
Topics mentioned in this article
Cricket New Zealand Cricket Team Sreesanth Kane Williamson Kyle Mills Daniel Vettori
Get the latest updates on Fifa Worldcup 2022 and check out  Fifa World Cup Schedule, Stats and Live Cricket Score. Like us on Facebook or follow us on Twitter for more sports updates. You can also download the NDTV Cricket app for Android or iOS.