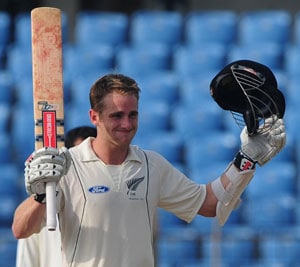 Kane Williamson hit a fluent century for New Zealand before Bangladesh hit back in the final session of the opening day's play in the first Test in Chittagong on Wednesday. (Match Scorecard)

Williamson made 114 to enable the Black Caps to reach 280-5 after they won the toss and elected to bat on a newly-laid pitch at the Zahur Ahmed Chowdhury stadium.

New Zealand were coasting at 244-2 when left-arm spinner Abdur Razzak, recalled to the Test side after two years, grabbed two of the three wickets that fell after tea.

Williamson was leg-before to Shakib Al Hasan in the penultimate over, before Razzak dismissed skipper Brendon McCullum (21) off what turned out to be the final delivery of the day.

The flurry of late wickets undid the good work of the top order where opener Peter Fulton made a patient 73 to lay the foundation of a big total.

Fulton put on 57 for the first wicket with Hamish Rutherford (34) and 126 for the second with Williamson on a slow wicket that hampered stroke-making.

Fulton, who needed 156 balls to reach his 50, celebrated his third half-century in Test cricket by pulling Marshall Ayub for a six over mid-wicket.

But the 34-year-old from Canterbury fell just before tea, hitting a short ball from part-time spinner Nasir Hossain to Mominul Haque in the covers.

"It was pretty disappointing not to be able to carry on with the job, but I am pleased with giving the team a good start," Fulton said after the day's play.

"We did a lot of good work in the first 85 overs, so it was disappointing to lose those last two wickets.

"We still have capable batsmen to come in and we will look to get around 350 to 400. That will give our bowlers something to bowl at. I would expect the wicket to get lower and slower."

Williamson moved to 98 with a back-foot punch off spinner Sohag Gazi for a boundary and then completed his fourth Test century with another four off Razzak in the next over.

Former captain Ross Taylor scored 28 in a third-wicket stand of 61 with Williamson before edging an intended flick off Razzak to substitute Naeem Islam in the covers.

Bangladesh captain Mushfiqur Rahim claimed the second new ball as soon as it was due after 80 overs and managed to scalp both Williamson and McCullum just before the close.

Nasir, delighted at claiming the wicket of a well-settled Fulton, said Bangladesh were on top after the late strikes.

"This was a good comeback by us," he said. "I would say the game is still in our hands. We are now in a very good position.

"But we will need to take their remaining five wickets as quickly as possible. The pitch will start to wear as the game goes on. Batting will be really difficult in the second innings."

New Zealand awarded Test caps to leg-spinner Ish Sodhi and all-rounder Corey Anderson, while batsman Ayub made his debut for the hosts.

The second Test will be played in Dhaka from October 21 to 25, followed by three one-day internationals and a Twenty20 game.