England bowled out Pakistan for 112 in 18.3 overs after setting them a target of 151 runs in the second T20 at Dubai to keep the 3-match series alive. 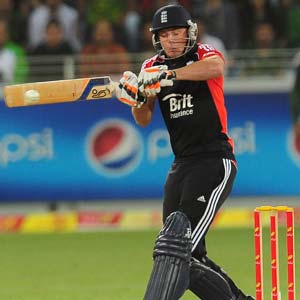 England bowled out Pakistan for 112 in 18.3 overs after setting them a target of 151 runs in the second T20 at Dubai to keep the 3-match series alive.

Jonny Bairstow revived memories of his brilliant England one-day debut with a maiden international fifty to set up a resounding 38-run victory against Pakistan under the Dubai floodlights and level the Twenty20 series at 1-1 with one to play.

Bairstow's 41 from 21 balls against India in Cardiff on a rainy night last September identified him as a one-day cricketer of immense promise but it had remained his highest score in eight innings in ODIs and T20s as England awaited confirmation that he could follow up his flash of brilliance by proving that, at 22, he was ready for the international stage.

Slow Asian pitches have forced some self-analysis for Bairstow but the Yorkshireman indicated it had been time well spent as he came alive against a high-class Pakistan attack. If Cardiff had brought excitement, Dubai, with the ring of fire blazing down, confirmed that it was not misplaced. An immensely watchable series will be decided in Abu Dhabi on Monday.

A dead surface made it a demanding night for batting and Pakistan, who had successfully defended 144 for 6 on the same ground two days earlier, floundered against one of the most skilful and intelligent England T20 bowling displays of recent memory. They never got close, even if while Shahid Afridi is around a distant target is seen as if through binoculars. Afridi was last out for 25, hacking Stuart Broad into the offside, kept off strike so successfully that he faced only 23 balls of the 58 delivered while he was at the crease.

Pakistan lost half their side for 50 by the ninth over, leaving their captain, Misbah-ul-Haq, to try to remedy a situation that he is not really designed to address. In both matches, slower balls have not as much deceived him as stripped him bare. He has done much to stabilise Pakistan in Test cricket, but the argument for a new one-day captain is a persuasive one. Bairstow had a say in his dismissal, too, a brilliant diving catch at long-on as Misbah charged at Graeme Swann.

Consolation for Pakistan came in the promise of Hammad Azam. Misbah has yet to allow him a bowl in this series, which is short-termism at its worst with World Twenty20 approaching, but even at more than 10 an over he posed a threat until a steepling blow was held at long-on by Jos Buttler, who had been off the field with an injured hand sustained when he dropped Umar Akmal at short midwicket, and who in one moment proved his fitness.

But the night belonged to Bairstow. Against an excellent Pakistan attack, his unbeaten 60 from 46 balls were runs well earned. He is that rare commodity for England, a power hitter, and after he squirted Umar Gul into the leg side to secure his half-century four balls from the end of the innings, he emphasised the fact by slapping a slow ball from Gul, a shot he did not really middle, over long-on for six.

He was determined to provide impetus from the outset. A flat six into the sightscreen bolstered his confidence; in his examination by Pakistan's spinners, he had at least gained pass marks on the subject of Afridi's googly. His most exceptional stroke, though, was reserved for Saeed Ajmal with slick footwork to make room followed by a regal off drive. There were muscular sweeps against the spinners and there was fun, too, as he grinned at Ajmal after daring a reverse sweep. He relishes a challenge and it will serve him well.

For another England batsman, life is not so grand. Eoin Morgan's tortured tour continued. He has yet to manage a half-century and, although he briefly hinted at better with two successive cover boundaries against Gul, he poked forward to Mohammad Hafeez and was lbw. He should have been lbw the previous ball, when he was defeated on the cut, but the umpire Ahsan Raza, unsure whether the ball had hit bat before pad, gave him the benefit of the doubt. Morgan insists that playing spin is a strength of his game, but the evidence that he is deluding himself is irrefutable.

When Craig Kieswetter, who had looked more threatening than at any time on tour, holed out at long-off for 31, with four wickets lost by the 10th over, England split their two greenhorns, Bairstow and Buttler, with Samit Patel, himself a veteran of only seven Twenty20s but more proven in these conditions and with a solid T20 record at Nottinghamshire behind him. Patel's run out, eschewing a dive to the crease as Ajmal hit direct with a throw from long leg will not find favour with England's management. It was careless from a player whose athleticism is forever in focus and whose fielding has shown signs of improvement.

Gul at the death - predominantly bowling yorkers with a hint of reverse swing - was again excellent and it did nothing for the reputation of Buttler's trademark shot, the step to leg and horizontal-bat shovel over his left shoulder. As Gul hit the stumps with a low full toss, the shot had got Buttler out on two successive occasions.

England again exposed the fragility of Pakistan's batting line-up and this time they did it with the aid of excellent catches. Hafeez made nought as a tall fast bowler, Steve Finn, was backed up by a tall first slip, Kevin Pietersen, who had received a rare invitation to the catching cordon. Jade Dernbach's reflexes were in good order, too, as he held Asad Shafiq's return drive and Morgan's catch was the best of the lot, intercepted at backward point to silence the dangerous Akmal.

But nothing was more impressive than the way they unravelled Awais Zia, mini Boom Boom, who had briefly flared in the first Twenty20. Zia faced 12 balls and managed only one scoring shot - a straight, length ball from Finn, just the delivery he feasts upon, which he clobbered over midwicket for six.

That apart, his limitations as a legside hitter were intelligently exposed as England nullified him with width and changes of pace. It is doubtful whether he has ever gone so many balls without scoring in his life. His last shot, which fell to Dernbach at mid-off, told of his desperation. It will be intriguing to see how he responds.

Comments
Topics mentioned in this article
Cricket Jonny Bairstow Waqar Younis Jonathan Trott England Cricket Team Wahab Riaz Pakistan Cricket Team Shoaib Akhtar Chris Tremlett Saeed Ajmal
Get the latest updates on India vs South Africa and check out  Schedule, Results and Live Score. Like us on Facebook or follow us on Twitter for more sports updates. You can also download the NDTV Cricket app for Android or iOS.