Jonny Bairstow won the Man of the Match for his 140 in the Leeds Test against Sri Lanka. However, he also snapped up nine catches and his improved keeping has been credited to a goalkeeping session for Newcastle United. 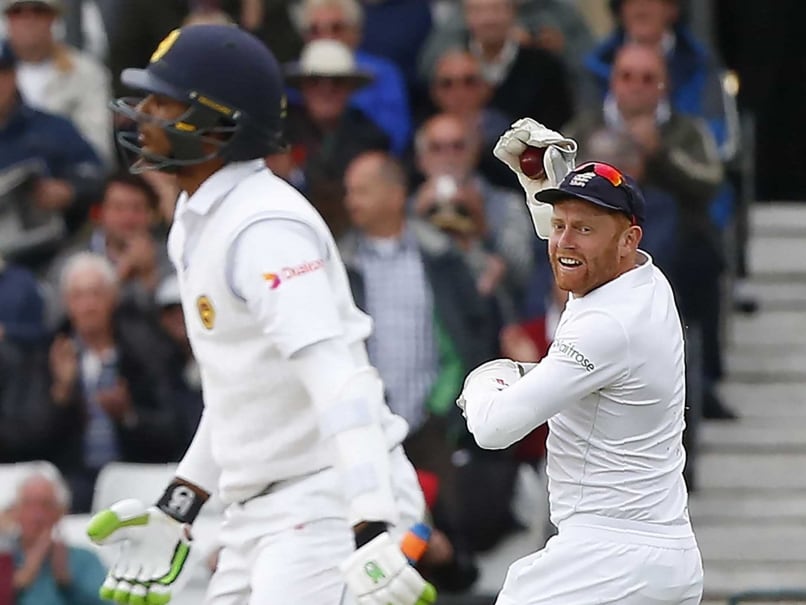 Jonny Bairstow took nine catches as wicketkeeper as England thrashed Sri Lanka by an innings and 88 runs in Leeds.© AFP

Jonny Bairstow's form with the gloves as much as his runs with the bat in the first Test against Sri Lanka delighted England's backroom staff.

The Yorkshireman's 140 on his Headingley home ground laid the platform for an innings and 88-run win that saw England go 1-0 up in the three-match series.

But the England wicket-keeper, the man-of-the-match, also held nine catches, including a couple of diving efforts that have troubled him in the past, as an attack led by James Anderson, who had overall figures of 10 for 45, kept finding the outside edge in a match that was wrapped up inside three days.

"He did one session with the goalkeeping coaches at Newcastle, on balance and shape of the body," explained England assistant coach Paul Farbrace.

"He really enjoyed that, and got a lot from it."

Bairstow grassed just one clear chance at Headingley and former first-class wicket-keeper Farbrace said there were definite signs of improvement in his work behind the stumps since England completed a Test series win in South Africa earlier this year.

"He looked balanced and very strong in his movements," said Farbrace. "In South Africa, he looked unbalanced.

"Predominantly, he stood a fraction too wide ... if you get a nick from there, you're off balance.

"The only chance he dropped in this game, he got done by the angle of the ball and missed it by a fraction.

"The rest of the game, I thought he kept incredibly well."

Balance of another sort remains an issue for England when it comes to the question of their top-order batting.

They slumped to 83 for five against Sri Lanka at Headingley but opener Alex Hales's patient 86, his Test-best score, went some way to suggesting he could nail down a place alongside Alastair Cook.

"It's a shame he didn't get a hundred. But in the situation, 86 runs on that surface was a fantastic innings," said Farbrace of Hales's knock.

"The big thing for him is (to feel) he can play Test cricket."

Nick Compton, under pressure for his place at number three, made a duck and was then denied a second innings in Leeds by England's dominance with the ball.

Compton is a steady, 'old-fashioned' top-order batsman and Farbrace denied suggestions he'd been told to play more aggressively by the England management or risk being dropped.

"I have read all the stuff about (Compton's) intense personality, but I have yet to meet a batsman at the top level who is not intense about the way they prepare," said former Sri Lanka coach Farbrace.

"What (we say to) players in red or white-ball cricket is 'play your game'.

"There is no pressure from us to put his foot down and start whacking it. We (just) want him to score runs - that is why he is in the side."

England will be without allrounder Ben Stokes for the second Test starting in Chester-le-Street onFriday. Stokes, who injured his left knee in Leeds, underwent scans which confirmed that the injury would not heal quickly enough for him to be fit for the Test.

Warwickshire's Chris Woakes has been called up in the England squad.

Comments
Topics mentioned in this article
Jonny Bairstow Chris Woakes Ben Stokes Nick Compton Riverside Ground, Chester-le-Street England Cricket Team Sri Lanka Cricket Team Cricket
Get the latest updates on India vs Australia Series, check out the India vs Australia Schedule for 2020-21 and Ind vs Aus live score . Like us on Facebook or follow us on Twitter for more sports updates. You can also download the NDTV Cricket app for Android or iOS.