Yorkshire's innings and 152-run First Division victory away to nearest pursuers Nottinghamshire at Trent Bridge saw them extend their record for most Championship titles to 32. 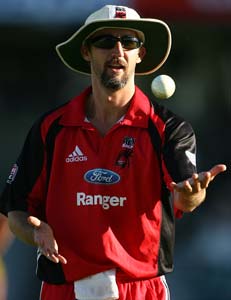 Jason Gillespie said he was pleased to have carried out the wishes of Yorkshire great Geoffrey Boycott after guiding the side to their first English County Championship title in 13 years on Friday.

Yorkshire's innings and 152-run First Division victory away to nearest pursuers Nottinghamshire at Trent Bridge saw them extend their record for most Championship titles to 32.

Headingley-based Yorkshire had just been relegated to the Second Division when former Australia fast bowler Gillespie took charge in November 2011 and he was left under no illusions as to what was expected of him by Boycott, one of England's best opening batsmen.

"I'm just one person. It's why we are called support staff," Gillespie, who has two spells as an overseas player.

"The club was disappointed to be back in Division Two and certainly our President at the time, Mr Geoffrey Boycott, left me in no doubt about what we had to do.

"I spoke to the lads, I'm big on enjoying the game," said Gillespie, who last season saw Yorkshire finish runners-up behind Durham.

"Work hard, but enjoy it. We've done that. We are here to entertain people, so let's put on a show. It's a long season, it's a challenge," added the 39-year-old, who took 259 wickets in 71 Tests at an average of 26.13 apiece as a key member of Steve Waugh's all-conquering Australia side.

Meanwhile the Yorkshire opening pair of Adam Lyth and Alex Lees have both been tipped for England call-ups.

Sidebottom took six for 30 and finished with nine wickets in the match as Yorkshire dismissed Nottinghamshire for 177 in their second innings.

Victory was particularly sweet for the 36-year-old Sidebottom, who twice won the Championship in his seven years with Nottinghamshire before returning to his native county.

Gillespie's role meant Australians had played roles in both Yorkshire's two most recent Championship successes, with Darren Lehmann -- now Australia's coach -- starring as a batsman in the White Rose's 2001 triumph when the side were coached by compatriot Wayne Clark.

Nottinghamshire resumed on 149 for five on Friday's final day of four in this First Division clash.

But Sidebottom was soon enjoying fresh success against his former side, with two wickets in as many overs.

He swung one past Gary Keedy to clean bowl the nightwatchman and then had Nottinghamshire captain Chris Read -- like Sidebottom a former England international -- caught behind after an excellent delivery nipped off the pitch.

Luke Fletcher briefly kept Yorkshire at bay before he too fell to Sidebottom when edging to second slip.

As James Taylor (75) looked on from the other end, stand-in captain Joe Root -- leading Yorkshire in place of the suspended Andrew Gale -- saw his decision to bring on Adil Rashid in place of Jack Brooks rewarded when the leg-spinner had Jake Ball lbw.

He and Yorkshire then had to wait another half-hour for their next step to glory, Luke Fletcher pushing forward and edging compliantly to second slip.

Sidebottom, just over an hour into the day's play, wrapped up the match and the title when Taylor drove him on the up to point.

Comments
Topics mentioned in this article
YOR Jason Gillespie Cricket
Get the latest updates on ICC T20 Worldcup 2022 and CWG 2022 check out the Schedule, Live Score and Medals Tally. Like us on Facebook or follow us on Twitter for more sports updates. You can also download the NDTV Cricket app for Android or iOS.