Aaron Finch slumped to the ground after snapping the tendon in his left leg in an IPL encounter for the Mumbai Indians against Rajasthan Royals on April 14. 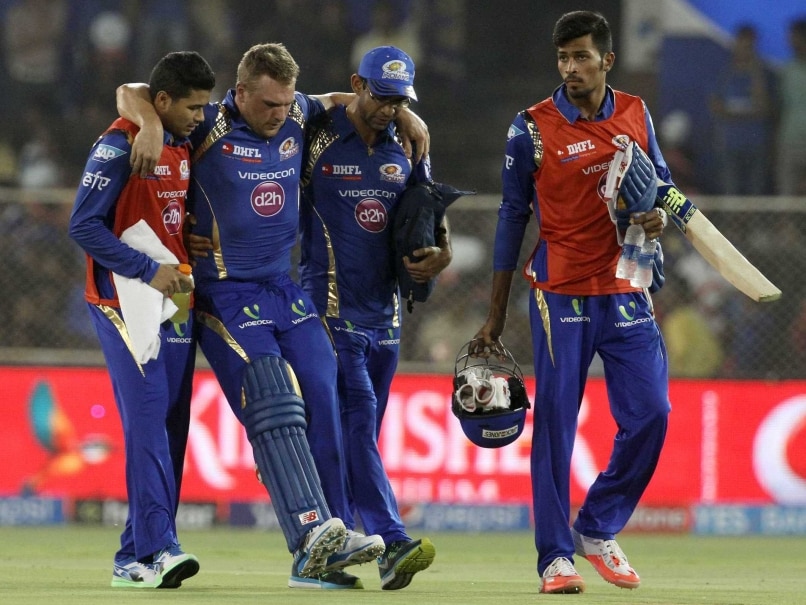 Injured Australian opener Aaron Finch is planning to return to cricket a month earlier than expected and now reckons he will miss just one week of his stint with English county side Yorkshire.

Finch, 17 days after a tendon surgery, said his rehab was ahead of schedule and had set himself an "aggressive" timeline to return to cricket. (Aaron Finch Ruled Out of IPL 2015)

"I'm hopeful to be back in six to eight weeks. The physio is not quite as aggressive as me. I'm seeing the surgeon and he's really positive as well. Hopefully, I'll get to Yorkshire about a week later than I was originally planned to from the IPL (Indian Premier League), which would be a great result personally to get over there and play cricket," Finch was quoted as saying by cricket.com.au.

Cricket Australia (CA) team physiotherapist Alex Kountouris is no stranger to hamstring injuries and Finch says he could not have been in better hands. (Mumbai Indians Breach Chennai Super Kings' Fortress)

"Luckily (Kountouris) has been through quite a few of these with Michael (Clarke) and the Marsh brothers and (Nathan) Coulter-Nile so he's right across the rehab and recovery. It's second to none. I couldn't be in better hands," Finch said on Friday.

The opener slumped to the ground after snapping the tendon in his left leg in an IPL encounter for the Mumbai Indians against Rajasthan Royals on April 14.

"It was just a big pop. Just one of those things; I didn't feel anything in the lead-up to it. I wasn't sore or tight. There wasn't any muscle damage which was quite strange, the tendon just snapped," he said.

Comments
Topics mentioned in this article
Australia Cricket Team YOR Mumbai Indians Aaron Finch Cricket
Get the latest updates on ICC T20 Worldcup 2022 and CWG 2022 check out the Schedule, Live Score and Medals Tally. Like us on Facebook or follow us on Twitter for more sports updates. You can also download the NDTV Cricket app for Android or iOS.