Angelo Mathews, the Sri Lanka allrounder, has been ruled out of the first Test against England with a calf injury that has quickened speculation that his ability to bowl at international level is now open to serious doubt. 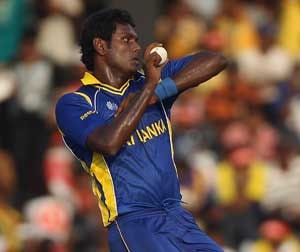 Angelo Mathews, the Sri Lanka allrounder, has been ruled out of the first Test against England with a calf injury that has quickened speculation that his ability to bowl at international level is now open to serious doubt.

The assertion by Ashantha de Mel, Sri Lanka's chief selector, that Mathews faces a potential future as a specialist batsman will come as a shock to a side that has only a couple of days to regroup ahead of the Galle Test after rushing back home from the Asia Cup in Bangladesh.

Mathews failed a fitness test on his injured calf on Friday morning. The injury kept him out of the Asia Cup and the finals of the Commonwealth Bank tri-series. Chamara Silva, a middle-order batsman, who made a magnificent century against England for the Sri Lanka Development XI earlier this week, replaces Mathews in the squad. Thilan Samaraweera takes over Mathews' role of vice-captain to Mahela Jayawardena.

"I don't think we can use Mathews as an allrounder in the future," de Mel said. "Mathews has some problem with his legs and it is very unlikely he will bowl much. We have to look at him purely as a batsman."

Silva, who took 163 from 180 balls off the tourists' attack on a bountiful batting surface at the SSC, only for England to win by four wickets in a last-day run chase, has been in prolific form during the home first-class season, being the only batsman to top 1000 runs. He played the last of his 11 Tests for Sri Lanka in April 2008 against West Indies in Port of Spain, and has since been in and out of the one-day side.

De Mel also stated that Tharanga Paranavitana and Lahiru Thirimanne will contest the right to partner Tillakaratne Dilshan at the top of the order. A fast bowler's spot is also likely to be similarly contested with either Suranga Lakmal or Dhammika Prasad expected to partner Chanaka Welegedara.

"The team management will have to take a call on who should bat at no. 7," De Mel said. "It is between regular wicketkeeper Prasanna Jayawardena and Dinesh Chandimal, who has not kept wickets for some time."

Comments
Topics mentioned in this article
Cricket England Cricket Team Sri Lanka Cricket Team Chamara Silva Angelo Mathews
Get the latest Cricket news, check out the India cricket schedule, Cricket live score . Like us on Facebook or follow us on Twitter for more sports updates. You can also download the NDTV Cricket app for Android or iOS.