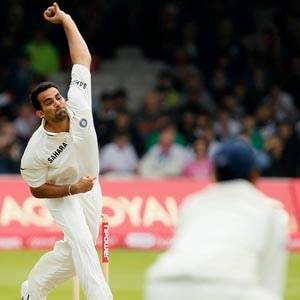 "It's not a natural thing," Zaheer told Times of India. "Indian bodies are not designed to bowl fast but that said, it's not very different from bowling outside India. Basically you have to spend a lot of time understanding yourself, your art, and then find out what works for you and what doesn't. It also involves a lot of hard work."

"You need to understand your bowling style and work on fitness that much more. The bottom line is as long you are able to produce results, it is fine. I also dropped pace, so basically it's important to know what works for you at the international level and put that into practice."

Zaheer had a successful stint with Worcestershire in 2006 and it helped him make a comeback to the national side after being dropped. Match practice, he said, was key to improving one's skill as a fast bowler. "The bottom line is match practice," he said. "Experience is something that is valued and you gain that by playing matches. No matter how hard you try at the nets, the match scenario is completely different.

"As for county cricket, their season is the off season in India, that's why I would recommend it, but again the bottom line is more matches, wherever you play."

India missed the services of Zaheer on the tour of England, where he was ruled out due to an injury. He picked up a hamstring injury on the first day of the first Test at Lord's, but he also had a right ankle impingement that required surgery, which he underwent recently. "I had an ankle surgery and all I can say at this point is that things are looking good," he said. "Progress has been slow but I'm not putting too much pressure on myself. I'm also not putting a timeline to my return. I did bowl from two steps today, and it felt really good.

"I wanted to play badly but what can one do. I was 100% fit when I landed in England and didn't rush my return in any way but picked up another injury. That's the way the game goes."

Comments
Topics mentioned in this article
India Cricket Team England Cricket Team Cricket
Get the latest updates on ICC T20 Worldcup 2022, check out the Schedule and Live Score. Like us on Facebook or follow us on Twitter for more sports updates. You can also download the NDTV Cricket app for Android or iOS.