Hardik Pandya was mobbed by his teammates after taking a spectacular catch to dismiss Martin Guptill but the most priceless reaction came from former skipper Mahendra Singh Dhoni. 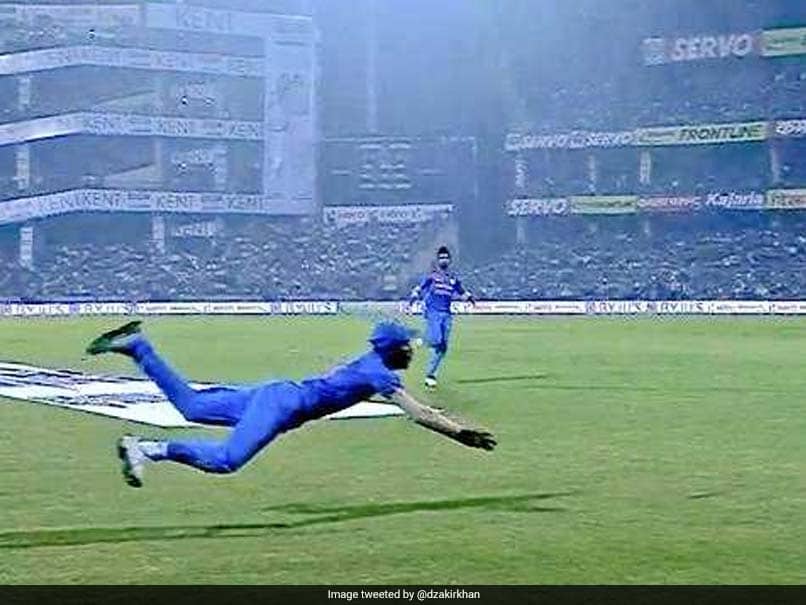 Hardik Pandya might have missed out with the bat in the first Twenty20 international between India and New Zealand at the Feroz Shah Kotla Stadium in New Delhi on Wednesday night, but the all-rounder surely made his presence felt by taking an absolute stunner to dismiss Kiwi opener Martin Guptill. Pandya sprinted from the long-off boundary and dived full length to send Guptill packing in the second over of New Zealand's innings. He was mobbed by his teammates but the most priceless reaction came from former skipper Mahendra Singh Dhoni.

India had piled on the runs after being put into bat in Ashish Nehra's farewell match. Some electric batting by openers Rohit Sharma and Shikhar Dhawan helped the hosts post 202 for three.

Chahal bowled the second over and Guptill tried to attack the leg-spinner almost immediately but his plan failed to work as Pandya produced a brilliant effort to send him back to the pavilion on 4.

Earlier, Pandya had failed to deliver with the bat after being promoted up the order. The all-rounder came in at one-down after Dhawan's dismissal but fell prey to Ish Sodhi in just his second ball for a duck.

In the field, skipper Virat Kohli gave Pandya just one over with the pacer getting the big wicket of Kane Williamson.

Barring a solid knock from Tom Latham (39) and an unbeaten 27 from Mitchell Santner, other New Zealand batsmen failed to get going as the visitors were completely outclassed by the Men in Blue.

Comments
Topics mentioned in this article
India Football Team India Cricket Team New Zealand Cricket Team Virat Kohli Hardik Pandya MS Dhoni India vs New Zealand Cricket
Get the latest updates on India vs South Africa and check out  Schedule, Results and Live Score. Like us on Facebook or follow us on Twitter for more sports updates. You can also download the NDTV Cricket app for Android or iOS.