Agarwal struck over run-a-ball and faced 312 deliveries in his unbeaten knock that was laced with forty one fours and three sixes. 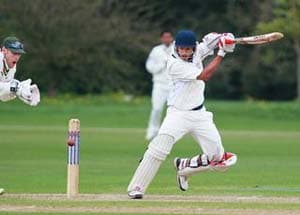 Samridh Agarwal - who holds an Indian passport - broke another Indian origin player's, Salil Oberoi - record of 247 when he scored 313 runs for Oxford University against Cambridge in a Varsity match on Wednesday at FP Fenner's Ground, Cambridge.

Agarwal -who recently completed his material sciences' study - struck over run-a-ball and faced 312 deliveries in his unbeaten knock that was laced with forty one fours and three sixes. In a report published in the Oxfordmail.co.uk, the player was quoted as saying that he wanted to do well on the field as this was his final year. ""It is my last year here and I especially wanted to do well, almost like leaving a legacy. "It was a really nice feeling to reach 300 and then to bowl them out cheaply was a bonus."

Put in to bat, Oxford rode on skipper Agarwal's triple ton to declare their innings on 550 for 7. In reply, the hosts were bundled out for 119 in 55.2 overs with Tom Williams and Sachin Mylavarapu bagging a fifer each.

Before Oberoi's double ton, the record was held by Iftikhar Ali Khan Pataudi or Nawab of Pataudi, Senior, who was the father of MAK Pataudi. The father-son duo, both of whom have captained Indian cricket team, also played for Oxford University side.

Samridh, fondly known as Sam, is now the only player to have hit a triple century for the Varsity side.

Comments
Topics mentioned in this article
Cricket Nawab of Pataudi Jr
Get the latest updates on IPL 2020, check out the IPL Schedule for 2020 and Indian Premier League (IPL) Cricket live score . Like us on Facebook or follow us on Twitter for more sports updates. You can also download the NDTV Cricket app for Android or iOS.