India A vs West Indies A: Cheteshwar Pujara falls as visitors inch ahead on Day 2

While Parvez Rasool's prediction of restricting West Indies A to around 300 failed as the visitors reached 429 in their first innings, even India A's top three - KL Rahul, Jiwanjot Singh and Cheteshwar Pujara - fell cheaply to give Windies an advantage. 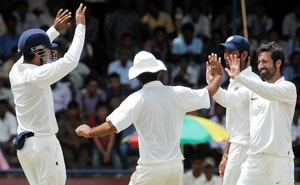 West Indies A would be the happier of the two teams at the end of the second day of their four-day game against India A at the Gangothri Glades ground in Mysore. They first stretched their first innings to 429, and then picked up vital India A top-order wickets, including that of Cheteshwar Pujara, to leave the Indians on 124 for 3 by the close on Thursday (September 26).

If most of Day 1 was about coming to terms with the conditions and playing attritional cricket, Day 2 started with a flurry. Parveez Rasool bowled the first over and there were shouts for lbw against Assad Fudadin off the first two deliveries, a spot of brilliant fielding by Manprit Juneja that almost led to a run out off the third ball, and, off the last ball of the over, a huge six from Chadwick Walton over long off.

Things changed quickly enough though, as Fudadin, who had scored his four runs in 65 deliveries on Wednesday, continued in the same vein. Walton's urgency might have helped, but when he had added just nine to his overnight 26, Ishwar Pandey sent him back lbw with a well-directed yorker.

And when Fudadin finally played a forceful shot, off the 86th ball he had faced with eight runs against his name, Rasool, the bowler, should have caught it. It was hit hard and went right through Rasool's hands for Fudadin's first boundary.

At times, Fudadin's lack of attacking instinct did seem excessive, but A-team cricket is also, maybe mainly, about pushing for a spot in the national team, and he was clearly doing what he thought would serve him best. And while there was the occasional loose shot, on the whole, Fudadin was steady.

India A finally took the new ball in the 10th over of the morning, but found no joy with it. If anything, stroke making became easier and Fudadin and Nikita Miller collaborated in an 88-run stand that ended off the final ball of the session when miscommunication between the two batsmen left Miller stranded mid-pitch. It really was fortuitous for the Indians because Miller had looked good during his 49, the innings studded with five pretty boundaries. In all, exactly 100 runs were scored in 27 overs in the morning.

Lunch was taken at 364 for 7, and fast running out of partners, Fudadin had little option but step on the gas. He did so quite well, and though Rasool sent both Veerasammy Permaul (11) and Delorn Johnson (0) back miscuing attempted hoicks, Fudadin sped away. Maybe, if he had changed gears slightly earlier in the day, he would have had a century against his name. When Rasool trapped Miguel Cummins (6) lbw to end the innings, Fudadin was stranded on 86, a determined if not eye-catching innings built over four-and-a-half hours. Rasool, who stuck to his task despite little help from the pitch, had returns of 5 for 116 to show from his 45 overs.

After the changeover, Jiwanjot Singh and KL Rahul started positively, treating the packed house of 4000-odd people to some lovely drives. Jiwanjot's straight-driven boundary off Johnson was particularly beautiful, but he couldn't push on, edging a Permaul delivery, which bounced off his pads for Walton, the wicketkeeper, to complete an easy catch. Jiwanjot had scored 16 in a 45-run stand for the first wicket.

Pujara walked in to loud cheers, which went up a notch when he glanced Permaul for three to get off the mark. But then came the anti-climax when, without adding to his score, he pushed Cummins uppishly to Kieran Powell at short cover. The pitch still didn't offer much to the bowlers, but India A had managed to slip to 49 for 2 by the 18th over.

Considering the Indians' plans of restricting West Indies A to around 300, as Rasool had said after the first day's play, had failed spectacularly, it wasn't a good position to be in.

But the two batsmen who were still in the middle made the subsequent passage of play easily the most attractive in the game so far. Rahul, 21, and Juneja, 23, are among the most talented young batsmen in the country at the moment and, without taking any risks, they started to bring India A back into the match. They cut and flicked, drove on either side, and threw in the occasional steer and pull to take India A past the 100-run mark by the 28th over.

Then came another stumble with the total on 109 when Rahul, who looked good for more, edged an attempted cut off Miller, the left-arm spinner, to Leon Johnson at widish first slip after scoring 46.

Juneja, however, didn't throw away his start. Lowering shutters soon after Rahul went and Harshad Khadiwale (5*) came in, he reached the end of the day's play unbeaten on 47.