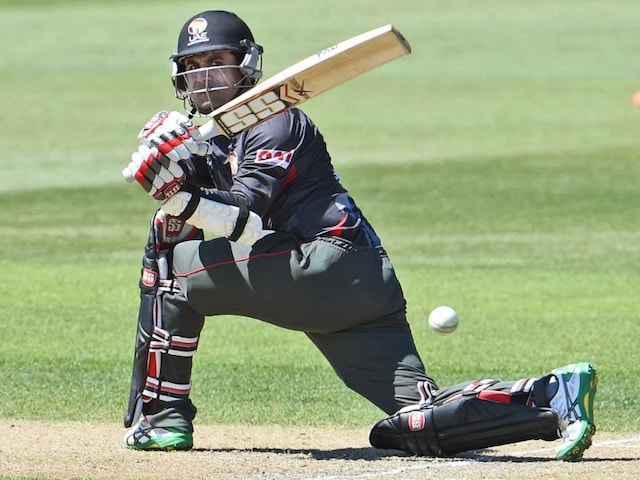 Shaiman Anwar of UAE in action against Zimbabwe during their World Cup 2015 match.© AFP
Nelson:

Zimbabwe admitted underestimating the United Arab Emirates after beating the cricket minnows with just 12 balls to spare in their World Cup match at Saxton Oval in Nelson on Thursday. (Scorecard | Match report | Match in pics)

It was a match the Test-playing Zimbabwe should have won easily against the least experienced and only amateur side in the tournament. (Complete coverage of World Cup 2015)

Instead the game went down to the wire after the UAE posted their highest-ever one-day international score of 285 for seven after being sent into bat. (In pics: UAE smash record on return to World Cup)

It took Zimbabwe until the end of the 48th over to pull off a four-wicket win built on the back of an 83-run stand for the sixth wicket between Sean Williams (76 not out) and Craig Ervine (42). (Also read: Zimbabwe target West Indies after win vs UAE)

"A lot of people would have thought Zimbabwe should have walked over UAE but that clearly wasn't the case," man-of-the-match Williams said.

"We didn't know what to expect from them and they put up a really good performance with the bat and our fielding wasn't that great."

Williams said Zimbabwe misread the UAE after watching videos of their previous games, which led them to believe the Middle East nation's batting was brittle.

"We were basically waiting for them to get themselves out but that wasn't the case," he conceded.

Their pursuit against the UAE began sedately before wickets started falling at regularly intervals and Williams admitted the tension was getting to him when Zimbabwe were in the shaky position of 167 for five in the 33rd over.

"I could feel it out there," he said. "I tried not to show it. I tried to breathe, relax and hit the ball down the ground and stick to what we'd been (doing in) training and it ended up paying off."

But the left-handed batsman, who has a deft reverse-sweep in his armoury, said the gap between associate or junior nations such as the UAE and Test-playing countries was closing.

"Any cricket team on the day, if they get all three departments (batting, bowling and fielding) right, will take a top team right to the end," he said.

"UAE are obviously still learning and so are we. They batted really well. I guess they just need to learn when the key moments are in a game, the same as Zimbabwe.

"We are still learning, trying to understand when key moments are and when to put the foot on the gas."

Zimbabwe's next game is against the West Indies on Tuesday in Canberra and UAE play Ireland the following day in Brisbane.

Ireland, who like the UAE are an associate nation, defeated the West Indies by four wickets in their opening fixture of the tournament.

Comments
Topics mentioned in this article
United Arab Emirates Zimbabwe Cricket Team Shaiman Anwar Cricket
Get the latest Cricket news, check out the India cricket schedule, Cricket live score . Like us on Facebook or follow us on Twitter for more sports updates. You can also download the NDTV Cricket app for Android or iOS.