ICC U-19 World Cup: Ravi Kumar was one of India's key players in the tournament and also in the final when they defeated Australia. 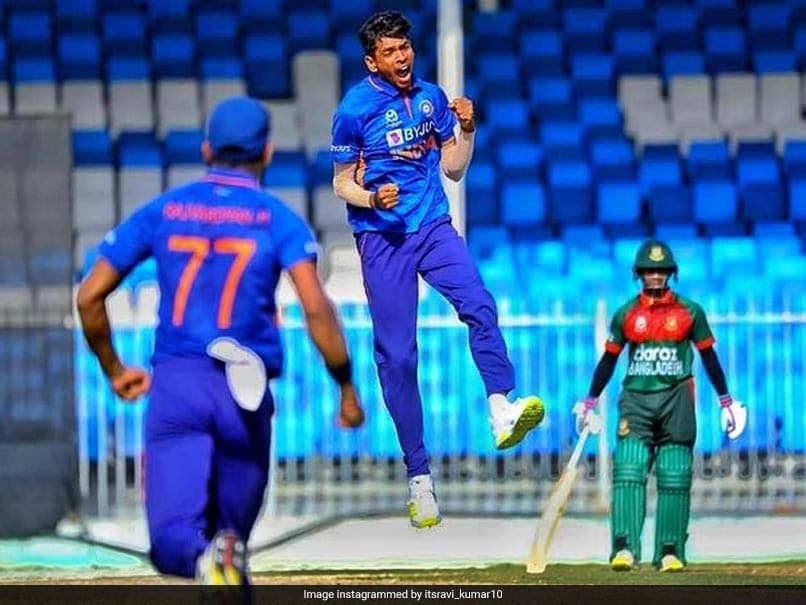 Ravi Kumar was in fantastic form during the U-19 World Cup.© Instagram

Ravi Kumar's emergence as the new hero of the under-19 World Cup is not only the result of his own hard work but also due to the sacrifices of his CRPF father, who spent most of his life serving the country. The 18-year-old from Aligarh on Saturday scalped four wickets to play a pivotal role as India beat England by four wickets to lift the coveted u-19 World Cup trophy for a record fifth time. "Hum goli chalake desh seva karte hai, aur beta ball daal ke," (We fire bullets to protect our country, and my son serves the country with his bowling)," said Ravi's father assistant sub-inspector Rajinder Singh, who is now posted in a CRPF camp in the Maoist-prone Rayagada district of Odisha.

Ravi was barely a toddler when Singh was badly injured in the 2006 Srinagar grenade attack which killed one and injured 11 soldiers but he never shared his trials and tribulations with his family.

Singh spent "nearly whole of his life" posted in the militant-hit regions of Srinagar but always ensured that his wife and three children live and sleep peacefully.

"I always ensured that my family stays happy, without knowing the pain that I endured. Even when I sustained splinter injury on both my legs and arms, I did not tell them. They only came to know from TV," he recalled about the grenade attack.

His son's fame in the U-19 World Cup has now made Singh a much sought-after person in the CRPF camp.

It all began with Ravi Kumar's man-of-the-match show against their last edition's final nemesis Bangladesh.

Ravi grabbed 3/14 in a sensational opening spell of 5-1-5-3 to spearhead India's five-wicket win and set up a semi-final clash against Australia.

He carried on his momentum to return with 2/37 against Australia and in the final he along with Raj Bawa shared nine wickets in between them to set up their four-wicket win over England.

"Normally parents worry about their kids study and future career but here's my boy who stood on his feet on his own and now making the country proud," Singh beamed.

Away from his family most of the times to serve the country, Singh hardly knew about the growth of his son as a cricketer.

"I was posted in J and K and always on the move. So little did I know much how he got into cricket. Like everyone else of his age group, he was always busy playing cricket for fun.

"Later I came to know that Arvind Bharadwaj ji has put him into serious cricket and that's how it all began for him 13-14 years ago," Singh recalled.

"I was also worried initially as I didn't have the money to support him in taking up cricket as a career, but he stood on his own. It shows the drive and commitment in him. Hope he makes the grade (to senior level)," he added.

It did not come easy for Ravi Kumar as he did not get chances in UP and had to take the Bengal de tour through the help of his Kolkata-based neighbour.

Without thinking twice, Ravi moved to Kolkata and played second division cricket before joining Howrah Union and then Ballygunge United from where he was picked for the Bengal Under-19 side last year.

Incidentally, he was not part of the India colts squad for a Tri-series -- featuring India U-19 A, India U-19 B and Bangladesh U-19 -- in the build-up to the U-19 World Cup here last December.

Over the last one year, Ravi has worked a lot on his fitness and gained muscle mass to be drafted into the squad after another player was ruled out due to injury.

"He has always been dedicated and committed. Even while we both are separated by miles most of the times, we talk via video call every day. He calls me during dinner time," Singh said.

"I always tell him no one is above the country, we should give our everything for 'Bharat Mata'. While I serve the country at war, your duty is to win matches for India with your bowling'."

Australia U19 Ravi Kumar ICC Under 19 World Cup 2022 Cricket
Get the latest updates on IPL Auction 2023 and check out  IPL 2023 and Live Cricket Score. Like us on Facebook or follow us on Twitter for more sports updates. You can also download the NDTV Cricket app for Android or iOS.