The rankings for women and men will be introduced in October 2018 and May 2019 respectively. 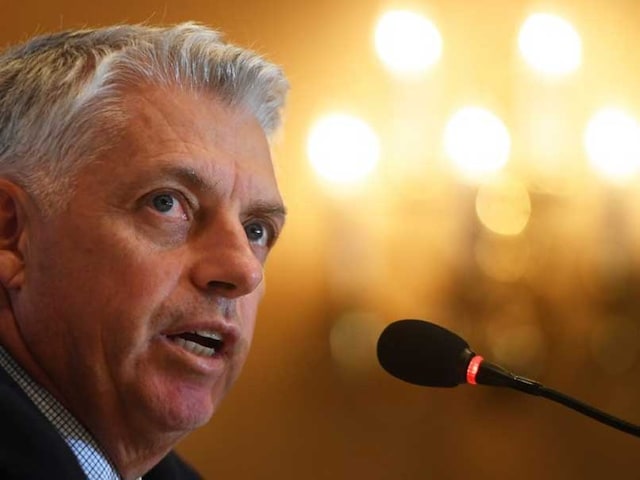 Dave Richardson is the CEO of the International Cricket Council© AFP

On the final day of a week of ICC meetings here, the ICC Board on Thursday gave the green light to all T20 matches between members being awarded international status along with plans to introduce global rankings in the format. The move across both men's and women's cricket, is part of the wider strategic aim of using the T20 format to globalise the game. New minimum standards will be introduced making it as easy as possible for Members to play international cricket in a sustainable and affordable way. All Member women's teams will be awarded T20I status from July 1 onwards, whilst all Member men's teams will be awarded T20I status from January 1, 2019 following the cut-off point for qualification to the ICC World T20 2020.

Rankings for women and men will be introduced in October 2018 and May 2019 respectively.

The ICC Code of Conduct review was also discussed throughout the week, with both the ICC Board and Member Chief Executives united in their commitment to address player behaviour.

There was clear direction from both to move towards stricter and heavier sanctions for ball tampering and other offences which were indicative of a lack of respect, this would include abusive language, send-offs and dissent to an umpire's decision.

In parallel with that, the creation of a culture of respect that embodies the spirit of cricket on and off the field of play.

ICC Members have signed off a new Future Tours Programme (FTP) for 2019-2023 that incorporates the introduction of a World Test Championship and an additional ICC World T20 event in place of the Champions Trophy in 2021.

This provides opportunities for 16 teams to compete at a global level with a sub-regional, regional and global qualification process every two years, giving more regular cricket to more Members.

ICC Chief Executive David Richardson said: "This set of meetings has seen some significant decisions made for the long term good of the game. Signing off the FTP has been the result of unwavering commitment from all Members to get to this point and we look forward to the commencement of both the new ICC World Test Championship and ODI League in 2019 and 2020 respectively."

The Board received a presentation around regulations and sanctioning of events including domestic T20 leagues and player release.

There has been a sharp increase in the number of T20 leagues seeking Member and ICC approval and the associated ongoing challenge to ensure the best players are playing international cricket.

It was widely agreed that domestic T20 leagues were good for the global game but steps needed to be taken to ensure international cricket remained attractive to players.

As such, the Board approved the establishment of a small working group to consider the issues and make some recommendations for consideration later in the year.

The Board agreed the process by which the ICC Chairman will be elected for the next two years from June when current Chairman Shashank Manohar's first two-year term expires.

The Board ratified the appointment of Belinda Clark of Australia as the women's Committee representative on the Cricket Committee replacing Clare Connor who had served a maximum of three three-year terms.

Whilst David White, CEO of New Zealand Cricket and John Stephenson, MCC both had their terms on the men's Cricket Committee extended.

ICC Chief Executive David Richardson on Thursday hoped that cricket would become a part of the Olympics from the 2028 edition in Los Angeles if all the cricket playing nations were united on this.

Stating that the International Cricket Council (ICC) is already late in formally applying to the International Olympic Committee (IOC) to include the gentleman's game in the 2024 Olympics in Paris, Richardson said they would continue talks with the IOC emphasising that cricket can add value to the Olympic Games.

"...Assuming that we can get all of cricket united in a desire to be a part of Olympics, then I think we would have a very good chance in persuading the IOC that cricket is a sport that can add value to the Olympics going forward," Richardson toldreporters On the final day of a week of ICC meetings here.

"The Olympics are going be held in Paris in 2024 and in Los Angeles in 2028. Already we have missed the boat for applying to the IOC through the front door to get the right to participate. We can go to Paris, talk with them and continue the talks in Los Angeles in due course and hopeful by 2028 we will have cricket in the Olympics," he said.

The official said the ICC's decision to engage more nations in global cricketing events through the T20 format would help them move an application to the IOC for the right to participate in the Olympics.

He also said the ICC has to resolve an issue with the Board of Control for Cricket in India (BCCI) and the Indian Olympic Association to take the issue forward.

Comments
Topics mentioned in this article
India Cricket Team International Cricket Council Cricket
Get the latest Cricket news, check out the India cricket schedule, Cricket live score . Like us on Facebook or follow us on Twitter for more sports updates. You can also download the NDTV Cricket app for Android or iOS.