The Need for Speed

The period lasting from the late 1970s to the mid-'90s was undoubtedly the golden age of West Indies cricket. The hallmark of this era was, of course, the pace quartet that a succession of West Indies captains could call upon to demolish opposition batting line-ups. 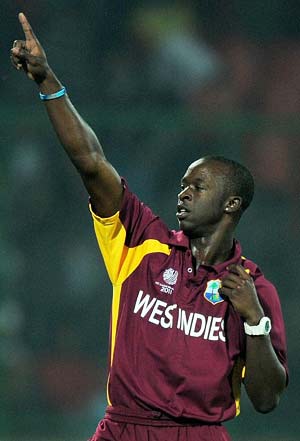 The period lasting from the late 1970s to the mid-'90s was undoubtedly the golden age of West Indies cricket. The hallmark of this era was, of course, the pace quartet that a succession of West Indies captains could call upon to demolish opposition batting line-ups.

In recent times, spin has dominated the bowling statistics in the Caribbean, and it's exciting to see Sunil Narine achieve some success at the Test level. On the slow pitches at home, he has been an asset both as a stock bowler and a wicket-taker.

But to have four formidable fast men operate in tandem was and still is, in many ways, a paradigm shift, as few teams can boast of having more than two or three genuine quick bowlers in their ranks.

In recent times, this legacy may have become a burden for West Indies teams. Since the retirement of Courtney Walsh and Curtly Ambrose, there has been a never-ending search to unearth quality fast bowlers and many heirs apparent have come and gone without making much of a mark.

I believe there is a good mix of fast bowlers coming through currently, although few can be considered "fast". Among those that were in the squad against New Zealand, only Kemar Roach, Fidel Edwards, and Tino Best can lay claim to that label. Though they may be "built like jockeys", as Curtly Ambrose likes to describe them, all three have genuine pace to rattle the best.

In Roach, West Indies have found their most viable successor. Height aside, he is perhaps the most complete bowler. His strengths are his skiddy pace and his preference to bowl full-length deliveries. Crucially, he's shown that he isn't afraid of hard work, with Man of the Series awards on the flat pitches in Sri Lanka in 2010 and in the recently concluded matches against New Zealand.

Edwards is another prospect who can be quite lethal when in his element. But he hasn't delivered on a regular basis and his slinging action makes him more prone to inconsistencies. I think a dose or two of patience would serve him well.

Tino Best could also fit the bill. He seems to have finally matured with age, but is still something of an enigma. In terms of getting swing and seam movement, he is less versatile than his teammates, but he is fit and less prone to injuries. The question is whether he can be patient enough, consistent enough, and just do enough with the ball to defeat quality players on good pitches. His zeal and energy certainly make him a challenge.

Aside from these three, some youngsters have also caught my eye. Shannon Gabriel's debut at Lord's earlier this season gave a glimpse of his potential. He's one of those rare modern-day West Indian fast bowlers with a combination of height and pace. Though he hasn't done enough with the ball in the air or off the pitch, he is a work in progress.

Delorn Johnson is a left-arm seamer that has also impressed me with his ability to swing the new ball as well as the old one at a reasonable pace. He gave a good account of himself against India A this season and, with a few more games under his belt, seems to be headed in the right direction.

One bowler that may have flown under the radar, but deserves a mention is Carlos Brathwaite. Well over six feet tall, Brathwaite generates good pace and bounce, and could be a bowler to watch out for in the future.

At the same time, someone like Ravi Rampaul can't be discounted. Though he bowls in the early to mid-80s mph range, he is a crafty bowler who makes the most of his ability. And like Best and Roach, he is not afraid of hard work.

That is what's truly a bonus with most of these bowlers - they are eager and hard-working. In terms of coaching, they have one of the most competent and astute minds in Otis Gibson to guide them. However, as in the case of Narine, we must remember to be patient and not expect too much too soon.

The good times may not be back yet, but West Indies cricket can look ahead with genuine hope.