Alastair Cook scored a brilliant unbeaten 168 to counter Pakistan's pace-cum-spin attack in style and led England to a steady 290/3 at close on day three in reply to Pakistan's mammoth 523/8 declared. England now trail by 233 runs with seven wickets intact. 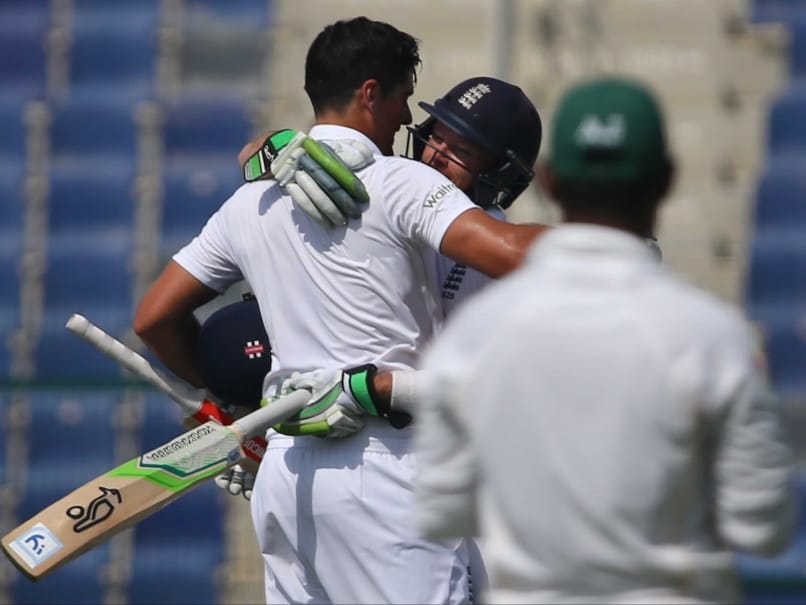 Ian Bell and Pakistan's spin-bowling coach Mushtaq Ahmed praised Alastair Cook for his dogged century in the first Test in Abu Dhabi on Thursday, saying the England captain knows how to bat in these conditions. (Scorecard)

Cook scored a brilliant unbeaten 168 to counter Pakistan's pace-cum-spin attack in style and led England to a steady 290/3 at close on day three in reply to Pakistan's mammoth 523/8 declared.

Cook added 116 for the opening stand with Moeen Ali (35) and another 165 for the second wicket with Bell (63) to anchor England's innings.

Bell showered praise on his captain, saying: "Cook has shown in this part of the world that he can do it for days," after the opener recorded his 28th century in Tests.

"He'll be ready to go again tomorrow. As ever, he's led from the front - shot selection and that sort of stuff against the spin was world class."

Bell said he follows Cook's example at the crease, adding: "He's so organised. When I watch him against spin his defence is incredible. The angles he works on the nets, and he executed the sweep today as well as I've ever seen him through a day of Test cricket.

"The way he works out his angles, for left-handers the rough outside their off stump can be tricky, but it was a masterclass today; how to defend, how to come down occasionally to chip over midwicket but also sweep from a full length."

However, Bell admitted the Sheikh Zayed Stadium pitch was not ideal for Test matches.

"This part of the world, the games do speed up towards the back end so it will be interesting to see what will happen in the next two days. It's not ideal, 11 wickets (in three days), but you get used to it on the subcontinent.

"If there was a little more pace it would have been a very good Test pitch."

Mushtaq, who also worked as spin consultant with England until 2014, said Cook has a brilliant record in Asia.

"His was a brilliant innings," said Ahmed. "He has got a brilliant record in Asia with a lovely temperament and when I was with the England team, he played beautifully in India and Sri Lanka when England won there.

"He takes lots of pressure off from other batsmen and with the new ball he kills the zip off the spinners and seamers nicely so I think it was a brilliant innings from Alastair."

"Yasir, as you know, has played a key role in the last two, three series," said Ahmed of the leg-spinner ruled out of the match with a back problem.

"Definitely we missed Yasir because he was suitable to this pitch but we did not expect this behaviour of the pitch, it has played slowly.

"This is a slow pitch and allows the batsman to manage anything even if the bowler disguises you with his line and length. To add to that we missed a couple of chances, otherwise we would have been in a good position."