I will be back, promises Irfan Pathan

Irfan Pathan was in the middle of his comeback when a knee injury laid him low again, allowing a batch of young pace bowlers to move ahead of him in the pecking order. He hasn't lost hope, though. When Wisden India caught up with him at the National Cricket Academy in Bangalore, Pathan exuded the confidence that greater things are in store for him including, possibly, a place in the Indian Test team. Excerpts: 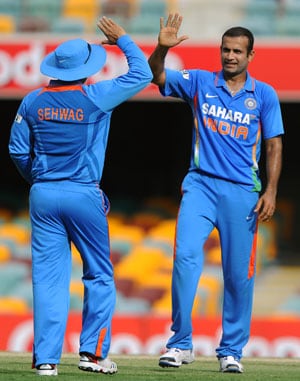 Irfan Pathan was in the middle of his comeback when a knee injury laid him low again, allowing a batch of young pace bowlers to move ahead of him in the pecking order. He hasn't lost hope, though. When Wisden India caught up with him at the National Cricket Academy in Bangalore, Pathan exuded the confidence that greater things are in store for him including, possibly, a place in the Indian Test team. Excerpts:

It must have been a disappointing season for you - you have been out of circulation since hitting that century in the first Ranji Trophy match for Baroda?

Obviously, it's not a good feeling. I missed out on the Pakistan series as well as the England series. At the time when I got injured, I was pushing for a place in the Test team also. So yes, definitely very disappointing, but Irfan has grown up over the years and these days, I accept whatever comes my way. So though I do get disappointed, I get over it quite quickly. I have had quite a few setbacks over the years, so I have learnt and accepted these things. From inside, I am very happy with my life.

Is it that as you get older, you realise there is more to life than just cricket, unlike when you're 20-22 and feel that the world is against you?

Yes, but cricket is always very, very important to me. Even when I am 40 or 45 years old, cricket will be very close to me. But you're right, nothing comes close to my family, my parents ... building a new house, that feeling of moving in, getting my mother's health back on track - those give me great satisfaction.

I have actually separated my two lives - my life as a cricketer and my life outside of cricket. In India, sometimes, we tend to put too much pressure on ourselves by focussing too much on our careers. The two lives get mixed up. So I try to separate the two lives.

I think it's very easy for me. Even if I am playing, my family is around, either on the phone or, often, at the ground. That gives me great peace.

In any case, when you are playing domestic cricket for Baroda, your brother (Yusuf) is always around.

Absolutely. My father also always comes to watch the domestic matches. He doesn't always come for the international games, but he is always there at the domestic games. So that helps and when I go through bad times like these, it becomes easier to deal with. There have been times when I have thought that things won't be okay again, but it's always become okay.

This time it was the knee, but you have had quite a few setbacks over the years - both in terms of form as well as injuries.

My back was the worst of them - in fact, that was my only major injury apart from the smaller muscle pulls and such things. Those things will keep happening with cricketers and especially fast bowlers. Look at Pat Cummins - he is so young, he bowls quick and he has been injured even before he really started his career.

You were also in the middle of a comeback, just about becoming a regular member of the limited-overs teams again.

In terms of returning to the Test team, I think it's been delayed, not hampered. I am pretty sure I am going to make a comeback soon in Test matches. In one-dayers, I was feeling very confident and comfortable. I had settled into the dressing room. The team was also getting used to me - Duncan (Fletcher) and the rest of the support staff. So I did feel a part of the team. But I will come back. There is a lot of cricket this season, so I think I can ease back.

Next up is the limited-overs leg of the Ranji Trophy and then the Indian Premier League. Are you in shape to be a part of them?

It's because I wanted to be a part of these tournaments that I took so much time off and trained at the National Cricket Academy. It's good that I will start with one-day matches and not four-day games. The idea is, of course, to make myself fit and available for selection in the Test matches. I haven't played Test matches for four years now. It's been a long time. So it will be good if I can make it. If I don't, then there is the IPL, the Champions Trophy, some other tours ... lots of cricket coming up. I should be 100% when I do return.

At 28, do you feel that a lot of younger bowlers have moved past you and you could have achieved more?

Do you actually keep track of these stats on a regular basis?

(Laughs) No, no, not at all. But I have had so much free time these last few days. I checked very recently. But yes, I would have liked to do more. I lost out on very important years of my cricket - both because of lack of performance and injuries. I had to start afresh. That has had an impact. But I am satisfied with where I have reached. I will do more though.

I got a lot of confidence from my showing in Sri Lanka and in the World T20. I got my old strengths back - getting late swing and curving the ball into the pads of the right-handers. I got wickets of big batsmen like that. TA Sekar helped me a lot, as did Eric Simons, both of whom are with Delhi Daredevils. Joe (Dawes, the Indian bowling coach) worked with me too.

But what exactly went wrong? Why weren't you able to do what you could do so easily at the start of your career?

You know, I won't tell you the exact thing, but it will surprise you to know who helped me the most to rediscover my strengths - Yusuf, and Rashid Patel, the former India seamer. They agreed on what my problem was ... it was a very small thing, but it helped a lot.

And you won't tell us what that adjustment was?

(Laughs) Not right now. I will, but later. But if you look at the World T20, I got a lot of wickets of big batsmen with my bread-and-butter delivery - so it's working very well for me. The one thing I have now is experience, so it's all working well together.

You know, the media and everyone else keeps asking 'what happened to Irfan' and 'why is he not doing well', but eventually you learn to calm down. I used to get excited about those comments earlier, but now I realise that whatever is destined for me will happen. I can only stay fit, watch the diet - I don't drink or smoke - and train properly. Good times are just around the corner.

Yes, but the trainers and physios at the NCA look after me very well. And, you know, the knee injury was a freak injury. I had just flown in from South Africa where we played the Champions League T20 and then played seven days in a row (India A vs England and Baroda's Ranji Trophy game). So my body was probably tired. I have never played seven days in a row. I dived when completing a run and landed badly on the knee. It was not a fitness issue.

When you look at Bhuvneshwar Kumar or Shami Ahmed, how do you suggest they should be handled? I ask you this because when a talented youngster comes in, we think 'oh, he shouldn't go the Irfan way'.

(Laughs) Bhuvneshwar is doing really well, but these things have a lot to do with genes, with the body type, with the bowling action and so many other things. In India, people say fast bowlers shouldn't go to the gym, they should keep bowling in the nets. But how can you avoid injuries?

Also, remember that fast bowling is not a natural thing to do. Our bodies are meant to be straight. But when we bowl, we twist our bodies. When you bowl fast, you go against nature. I now know that each time I bowl a delivery, I put eight times my bodyweight on my leg when I land before delivering the ball. This is not natural.

The workload in terms of non-stop cricket also can't be helping. Do you recommend rotation of bowlers at the top level?

No, it's something each bowler must learn. I think the onus should be on the bowler to protect himself. I keep telling everyone about my injuries and try to help them. But preservation is a combination of a number of factors. Your exercise routines, the muscles you focus on ...

But there is a lot of cricket all around the year and that can't be helping?

Yes, there is a lot of cricket and there is a lot of travelling and there is very little time for rest and recovery. I am pretty sure that in future, teams will travel with three-four physios and more back-up bowlers. There will be injuries, but they need to be managed. I don't know about rotation, but I do think managing the workload will be key. It is already quite scientific and it will become more scientific. I have been managed really well since I started spending time at the NCA. Right now, I am a couple of kilos overweight because I haven't run for two months, but it will go in two weeks once I start bowling and running.

Comments
Topics mentioned in this article
Cricket Irfan Pathan Bhuvneshwar Kumar Shami Ahmed
Get the latest updates on ICC T20 Worldcup 2022 and CWG 2022 check out the Schedule, Live Score and Medals Tally. Like us on Facebook or follow us on Twitter for more sports updates. You can also download the NDTV Cricket app for Android or iOS.