Haryana extend lead to 250 to put Delhi under pressure

The India discard, Amit Mishra, is batting on 50 and has added 58 runs for the seventh wicket with Jayant Yadav. Mishra scored his runs off only 62 balls with four boundaries and a big six. 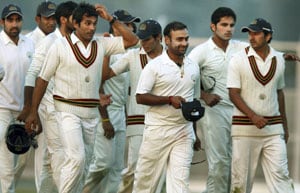 Hosts Haryana are in an advantageous position against Delhi having ensured three points with a first innings lead and then extending it to 250 at stumps on the penultimate day of their Ranji Trophy group league match at the Bansi Lal Stadium.

Haryana got the important first-innings lead after Delhi were bowled out for 224 in reply to Haryana's first innings score of 307. The hosts then build upon their 83-run lead to finish the day at 167 for six, courtesy a fine half century by skipper Amit Mishra.

The India discard is batting on 50 and has added 58 runs for the seventh wicket with Jayant Yadav. Mishra scored his runs off only 62 balls with four boundaries and a big six.

Left-arm spinner Vikas Mishra was the most successful bowler for Delhi in the second innings getting three for 57. All-rounder Sumit Narwal got two for 15 with his seamers.

As things stand now, if Haryana are able to last till lunch, Delhi will then have to settle for a draw and try to play for a point.

Earlier, Delhi started the day with overnight not out batsman Unmukt Chand and veteran Mithun Manhas who had retired hurt on 20 last day. However Unmukt was only able to add seven runs to his overnight score of 76 as he nicked one from medium pacer Ashish Hooda to glovesman Nitin Saini. Unmukt's 83 came off 152 balls with nine fours and two sixes.

Delhi were 186 for seven at that stage and the dream of getting three points was as good as over.

Veteran Manhas scored his 39th half-century in first-class cricket but had very little support from the other end. He was the last man out caught by Abhimanyu Khod to become medium pacer Mohit Sharma's third victim. Sharma and Harshal Patel ended with three wickets apiece.