Senior off-spinner Harbhajan Singh was back in his element as he had match-haul of seven wickets (4/91 &amp; 3/62) for Essex against Glamorgan in an English county game, which ended at the Castle Park Ground, in Colchester, on Saturday. 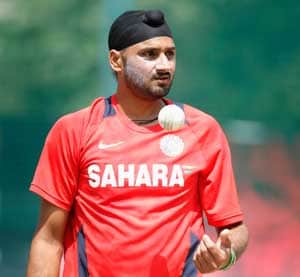 Senior off-spinner Harbhajan Singh was back in his element as he had match-haul of seven wickets (4/91 & 3/62) for Essex against Glamorgan in an English county game, which ended at the Castle Park Ground, in Colchester, on Saturday.

Having taken four wickets in an earlier match against Kent in Canterbury, the 'Turbonator' has now taken 11 wickets in two first-class match -- a clear indication that he is in fine form.

The national call-up must have spurred country's senior most spinner to show that he still has a lot of fire left in him. The zip is back, so are the confident strides as he bowled a total of 65 overs in the match --- 35 in the first innings and 30 in the second innings.

This is incidentally the first of his five first-class matches that wasn't interrupted by rain as Harbhajan grew in confidence with each wicket.

Harbhajan's scalps in the first innings included Ben Wright (47), centurion Stewart Walters (159), Mark Wallace (36) and Dean Cosker (4). It was due to Harbhajan's controlled bowling after which Glamorgan easing their way at 316 for three were all-out for 438.

Essex scored 520 in their first innings and then it was Harbhajan, who opened the bowling got three quick wickets of William Bragg (23), Nick James (32) and first innings centurion Stewart Walters (1) to reduce Glamorgan to 63 for four.

The wickets of Bragg and Walters especially were satisfying as both were caught by glovesman James Foster.

It was a classical off-break that turned away from Bragg into the gloves of Foster while right hander Stewart got a straighter one. Harbhajan's form augurs well for India's World T20 campaign and should also give selectors confidence to get him back to Test squad for the tougher Test series against England and Australia.

Comments
Topics mentioned in this article
Cricket Harbhajan Singh Sourav Ganguly Danish Kaneria Lonwabo Tsotsobe
Get the latest updates on ICC T20 Worldcup 2022 and CWG 2022 check out the Schedule, Live Score and Medals Tally. Like us on Facebook or follow us on Twitter for more sports updates. You can also download the NDTV Cricket app for Android or iOS.