Grateful to BCCI for the cricket I played, says Mohammad Azharuddin

Mohammad Azharuddin on Thursday said that he is happy with Andhra Pradesh High Court ruling that the life ban imposed on him is illegal and says he does not blame anybody for either the ban or the time taken for the verdict. 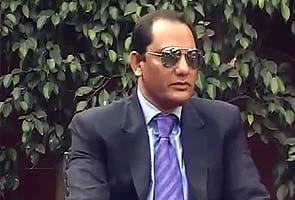 As the Andhra Pradesh High Court on Thursday overturned the life ban imposed on him by the Board of Control for Cricket in India (BCCI), former India captain Mohammad Azharuddin humbly said he was grateful to the board for whatever cricket he played.

Azharuddin said he always believed in the "almighty Allah" and his conscience was clear during his 12-year long battle to clear his name of the match-fixing charges.

"I am grateful to the Indian cricket board for whatever cricket I have played. It is all because of them. I had no complaints against the board during my playing career. I have got a lot in life from cricket," Azharuddin told reporters at his official residence here.

Asked if he feels that the BCCI would not pursue the case any longer after Pakistan also went soft on Salim Malik, a former captain who too was banned for life, Azharuddin said: "It is tough to say. But I think it has been a good move to bring back the banned cricketers in the normal fold of life."

Azharudding said he was looking forward to work with the BCCI to develop Indian cricket.

"I am open to working with the BCCI. But it is up to them," he said.

Azharuddin, now a Congress MP from Moradabad, Uttar Pradesh, said he played the game honestly and was a relieved man as the court struck down the BCCI's ban as "illegal". The BCCI Dec 5, 2000, banned Azharuddin and Delhi cricketer Ajay Sharma for life from playing professional cricket on charges of match-fixing.

"I have always played the game honestly and with command. Today I am a relieved man after what I have suffered for the last 12 years. I fought this battle for so long with patience. It has been a tough battle and I am grateful to everyone who has supported me during this difficult period."

As soon as the news broke out, Congress party workers and fans burst crackers at his residence near Lodhi Gardens. Amidst the huge media presence, party colleagues and friends came with bouquets to congratulate him. It was certainly early Diwali at C-1/12, Lodhi Garden.

But amidst the celebrations and cracker fire, Azharuddin remembered his younger son Ayazuddin, who died last year in a road accident.

"The last year has been very tough. Today I want to be happy with my elder son Abbas. I wish the judgment had come a bit early," he said.

Asked who all from the cricket fraternity supported him during the last 12 years, Azharuddin said: "I always got support from Raj Singh Dungarpur, Kapil paaji and Kamal Morarka."

When the BCCI banned him, Azharuddin was left stranded on 99 Tests.

Asked if he regrets not having completed 100 Test matches, Azharuddin said: "I think I was probably destined to play 99 Test matches, hence played that many. I believe what has to happen, will happen."

Azharuddin, however, regretted not having scored more than 22 Test centuries.

"I have 22 centuries. I think the way I started with three consecutive centuries, I should have got around 27-28 centuries. But I have no regrets. I led the team for nine years with success. That is how life is," he said.

The former India captain also thanked the Congress party for its support.

"I am grateful to the party for the support. Three years ago when I decided to join politics, they always believed in me. I didn't know abc of elections but the party stood by me during the tough time," he said.

Azharuddin had challenged the Indian cricket board's decision in the Hyderabad civil court, which upheld the ban. He then moved the Andhra Pradesh High Court against the lower court's order. His lawyers argued that the BCCI imposed the ban without any evidence.

Azharuddin, one of India's most successful captains, played 99 Tests and scored 6,215 runs during his career. He also played 334 One-Day Internationals scoring 9,378 runs in his 15-year international career.

Comments
Topics mentioned in this article
Cricket Mohammad Azizuddin Azharuddin BCCI
Get the latest updates on IPL 2021, IPL Points Table , IPL Schedule 2021 , live score . Like us on Facebook or follow us on Twitter for more sports updates. You can also download the NDTV Cricket app for Android or iOS.