Tim Bresnan and Graeme Swann return to England whites after injury layoffs while Jonathan Bairstow too finds a place. 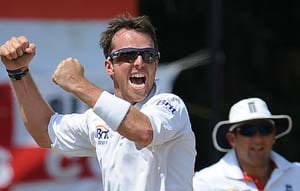 Graeme Swann and Tim Bresnan were both recalled by England in a 12-man squad announced Saturday for next week's first Test against New Zealand at Lord's following their respective recoveries from elbow surgery.

Off-spinner Swann and seamer Bresnan both last played Test cricket in the series-clinching win over India in Nagpur in December and missed the recent drawn three-Test series in New Zealand.

However, Nottinghamshire's Swann and Yorkshire's Bresnan have both since proved their fitness playing county cricket this season.

With star batsman Kevin Pietersen already ruled out because of knee trouble, there were few surprises in the squad announced by England national selector Geoff Miller.

The same six specialist batsmen who played in England's last Test -- the dramatic draw against New Zealand at Auckland two months ago where wicket-keeper Matt Prior's unbeaten hundred helped stave off defeat with just one wicket standing -- were included.

Swann, as widely predicted, replaced Monty Panesar as the only specialist spinner in the squad while England opted against naming an extra seamer, as they did when Durham's Graham Onions was included before last year's corresponding first Test of the English season, against the West Indies.

"Both Graeme Swann and Tim Bresnan have worked hard to regain fitness following elbow surgery and have demonstrated through their performances for their counties that they are ready for the challenge of international cricket," Miller said.

Although billed in some quarters as a mere 'warm-up' for England's subsequent home Ashes series against Australia, this two-Test contest -- the second match is at Headingley later this month -- promises to be considerably more interesting than that after Alastair Cook's side were held to a 0-0 draw in three matches in New Zealand.

"We are anticipating another very competitive series against New Zealand and know that we will need to improve significantly on our performances in the recent Test series against them if we are to start the international summer on a positive note," former England off-spinner Miller added.

"This series provides a good opportunity for the players to show that they have learnt from the experiences over the winter."

Comments
Topics mentioned in this article
Cricket England Cricket Team James Anderson Graeme Swann Kevin Pietersen Tim Bresnan New Zealand Cricket Team
Get the latest updates on ICC T20 Worldcup 2022 and CWG 2022 check out the Schedule, Live Score and Medals Tally. Like us on Facebook or follow us on Twitter for more sports updates. You can also download the NDTV Cricket app for Android or iOS.