The German Football Federation announced that no action will be taken against Bundesliga players for their solidarity with George Floyd. 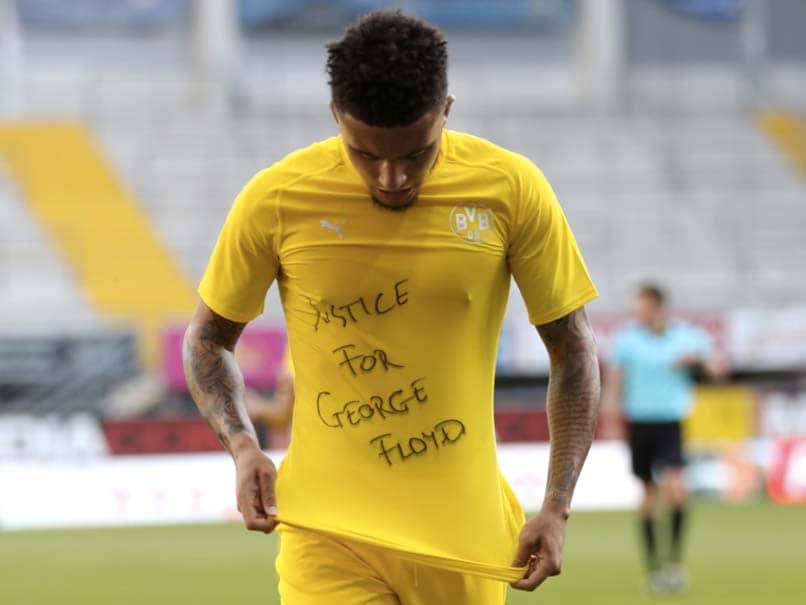 Jadon Sancho had displayed the message ''Justice for George Floyd'' on his shirt.© AFP

The German Football Federation (DFB) on Wednesday announced that no action will be taken against Bundesliga players for their solidarity with George Floyd. "The DFB's control body will take no action against Achraf Hakimi, Jadon Sancho (both of Borussia Dortmund), Weston McKennie (FC Schalke 04) and Marcus Thuram (Borussia Monchengladbach) for their solidarity with George Floyd, and their anti-racist messages," DFB said in a statement. "This line will also be taken should further players make demonstrations against racism and the death of Floyd over the course of upcoming matchdays," it added.

''Black Lives Matter'' protests have intensified across the US after George Floyd, an African-American man, passed away after having a knee pressed into his neck by a police officer identified as Derek Chauvin.

Hakimi and Sancho had displayed the message ''Justice for George Floyd'' on their shirts after scoring in the match against Paderborn on Sunday.

Borussia Monchengladbach forward Thuram took a knee during a goal celebration as his side beat Union Berlin while McKennie had written ''Justice for George Floyd'' on his armband in Saturday's 1-0 defeat.

"I welcome the control body's far-sighted decision and am very pleased with it. The DFB is opposed to all forms of racism, discrimination and violence, and stands for tolerance, openness and diversity - all values that are also deeply ingrained with the DFB statutes. That's why the players' actions have our respect and understanding," Keller said in a statement.

Anton Nachreiner, chairman of the DFB's control body, said in agreement with DFB President for Legal Affairs Rainer Koch, "It goes without saying that the DFB's control body always has FIFA and DFB regulations in mind. In this specific case, however, these are deliberate actions of anti-racism by the players, who are thus campaigning for the very values which the DFB seeks to uphold. So no action will be taken now, nor in the case of further anti-racism demonstrations over coming weeks."

Comments
Topics mentioned in this article
Jadon Sancho Cricket
Get the latest updates on India vs South Africa and check out  Schedule, Results and Live Score. Like us on Facebook or follow us on Twitter for more sports updates. You can also download the NDTV Cricket app for Android or iOS.