Franchise cricket is best for me and my family: Simon Jones

Simon Jones, one-fourth of probably the finest England fast-bowling attack in recent memory, wants to be a freelance T20 cricketer for the rest of his career. 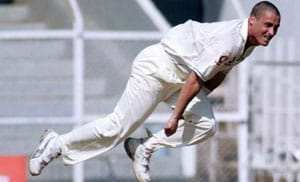 Simon Jones, one-fourth of probably the finest England fast-bowling attack in recent memory, has edged closer and closer to the end of his career, but said he wants to try his luck as a freelance Twenty20 cricketer before quitting the game altogether. (Related: Jones bows out of first-class game)

The last of his 18 Tests for England was in August 2005. Jones took 5 for 44 in Australia's first innings in that match in Trent Bridge. Since then, it's mostly been a long-running fight with injuries.

On Saturday (September 21), Jones hoped to represent Glamorgan in the YB40 final against Nottinghamshire at Lord's.

There's been talk of Glamorgan keeping Jones on for the next season, but only as a T20 cricketer. That's because Jones wants to be a freelance T20 cricketer for the rest of his career, available to anyone who can afford to hire him. He has been on the lookout for teams around the world, and if he can pull it off, he will become the first England cricketer after Andrew Flintoff to quit the other formats and commit to T20 without a county contract.

His hand has been forced, to an extent, because Glamorgan haven't really shown a lot of interest in keeping him on their rolls. "I have got three young boys and a wife to look after," he said. "So I am trying to do what is best for me and my family. I love the game too much to just pack it in."

His love for the game has never really been in doubt; if that had not been the case, the number of serious injuries he has suffered over the years might well have turned him away from the game. Like the one - a cruciate ligament injury - on his first day of Ashes cricket at Brisbane in 2002. "You tell yourself that these things happen for a reason. Maybe in 2002 when I hurt my knee maybe I wasn't ready for the Ashes, I don't know, but when I came back in 2004 I had matured as a guy, and I had a good chance to work on my action, so I was a better bowler," said Jones.

He certainly was brilliant in the 2005 Ashes. Along with Harmison, Hoggard and Flintoff, Jones helped England create history. "I don't think you'll ever see a better standard of cricket, but when I think about it now I have to ask 'was it really eight years ago?' That seems crazy," he said.

Jones missed the last Test of that series with an ankle injury, and when he came back into the team for the Test tour of India in 2006, he twisted his ankle in the nets during a warm-up match and had to go back. His left knee went later that year. In 2008, he hurt his calf and, later, his hamstring. There was no action in 2009 as he underwent knee surgeries.

"You do ask yourself 'how many times can I take a kick?' It'd be easier if I were unfit," pointed out Jones. "Then I would put my hand up and say that I had not looked after myself. But when you see guys who train half as hard as yourself playing full seasons without any niggles, that's when you think 'jeeze, what in the world is going on?'

"You get to feel like a bit of a spare part really; you feel so out of the loop, and you become a bit paranoid. That's what gets you.

"Maybe ten years ago I would have just packed it in and probably been quite a frustrated man. But now there are more opportunities and I just don't want to be one of those people who retires and thinks 'what if'. You are a long time retired, and I don't want to find myself looking in the mirror and thinking 'I wish I hadn't given that up'."