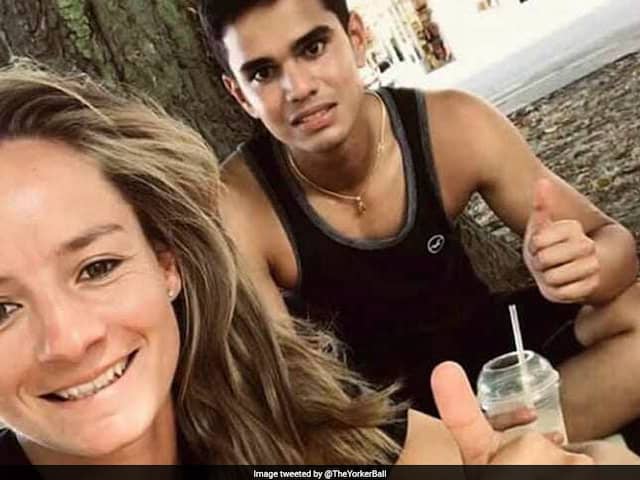 England women's cricket star Danielle Wyatt and Arjun Tendulkar, son of India cricket legend Sachin Tendulkar, seem to share a great friendship. The duo have been spotted enjoying each other's company in England. Arjun Tendulkar, who recently made his debut for the Indian U-19 team in Sri Lanka, is in London training with the Marylebone Cricket Club (MCC) youth setup. The young all-rounder has been helping out with the groundsman duties at Lord's and was even pictured selling radios outside the iconic ground. With rain a constant in the Lord's Test between India and England, Arjun Tendulkar has been hard at work but that still didn't stop England women's team star Danielle Wyatt from urging the Indian youngster to get to work.

Wyatt posted a video on her Instagram story, in which she can be heard urging Arjun to get back to his groundsman duties at Lord's.

A Twitter user shared that video on his page.

A few days back, none other than India spinner Harbhajan Singh bumped into Arjun while he was selling radios outside Lord's. The veteran off-spinner took to Twitter to post a picture with the caption reading: "Look who selling radios @HomeOfCricket today.. sold 50 rush guys only few left junior @sachin_rt #Goodboy".

While Arjun has been in the spotlight for his off-field doings at Lord's, he made the news last month for his on-field performances.

He was selected in the India U-19 squad for the Youth Test-series against Sri Lanka and ended up claiming a wicket in his first over of that match.

Meanwhile, for India, Lord's Test turned out to be a nightmare as hosts England inflicted a crushing an innings and 159-run defeat on the visitors to take a 2-0 lead in the five-match Test series.

England Women Arjun Tendulkar Danielle Wyatt Cricket
Get the latest Cricket news, check out the India cricket schedule, Cricket live score . Like us on Facebook or follow us on Twitter for more sports updates. You can also download the NDTV Cricket app for Android or iOS.