The players gathered in a semi-circle on the pitch before play started to observe a minute's silence in memory of the victims of the coronavirus and West Indies great Everton Weekes, who died last week at the age of 95. 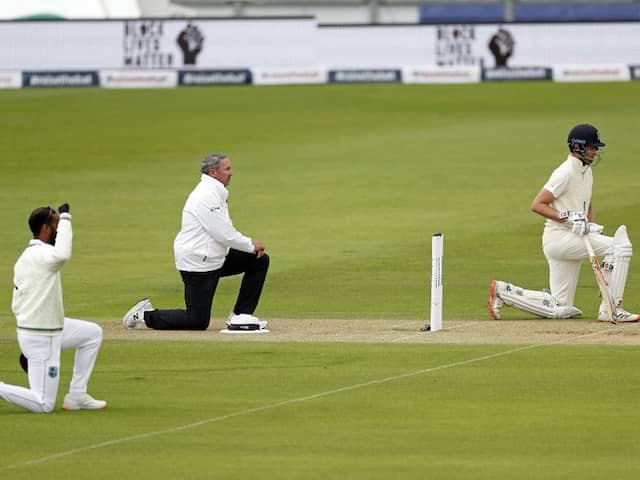 International cricket resumed after a four-month coronavirus shut down on Wednesday as England and West Indies players took a knee in support of the Black Lives Matter movement under grey skies in Southampton. England stand-in captain Ben Stokes won the toss following a rain delay and opted to bat but just three overs were possible before the weather intervened again. The players gathered in a semi-circle on the pitch before play started to observe a minute's silence in memory of the victims of the coronavirus and West Indies great Everton Weekes, who died last week at the age of 95.

They then dropped to one knee in support of the global campaign against racial injustice following the death in the United States of George Floyd in May.

Both teams are wearing BLM logos on their shirts during the three-match series.

West Indies players also wore black gloves on their right hands in an echo of the "Black Power" protests made famous by US athletes at the 1968 Mexico City Olympics.

All three Tests are taking place behind closed doors, with the first at the Ageas Bowl and the second two at Old Trafford.

The morning was lost to rain and when play eventually started, England lost Dom Sibley off the 10th ball, when he was bowled by Shannon Gabriel.

Stokes, standing in for Joe Root, who is missing the first Test due to the birth of his second child, spoke of the excitement ahead of the restart of cricket.

"I know everybody has been craving this, certainly from a players' point of view but I also think from a spectators' and fans' view," he said on Tuesday. "This is a massive occasion for a lot of people."

But the skipper said the lack of a crowd was no reason for England to let their standards slip.

"We know we have that responsibility on our shoulders, to go out and do justice for all those people," he said.

Players and officials are staying at on-site hotels to stop the spread of COVID-19 and bowlers are not allowed to use saliva to shine the ball as part of strict measures to control the spread of coronavirus.

"It's a huge blueprint for how cricket can move forward," said Simmons, whose side quarantined and trained at Old Trafford from June 9 before travelling south.

"We're about to show that other places can start putting things together. The England and Wales Cricket Board have to be commended for all the work they have done to get the series on the road and let's see what other countries take from it."

England left out veteran paceman Stuart Broad, their second most successful Test bowler behind James Anderson, who did start, as well as Chris Woakes.

West Indies have not won a Test series in England since 1988, but they hold the Wisden Trophy after a 2-1 series win in the Caribbean last year.