England currently lead the two-match Test series 1-0 against Bangladesh. They won the first Test in Chittagong by 22 runs. 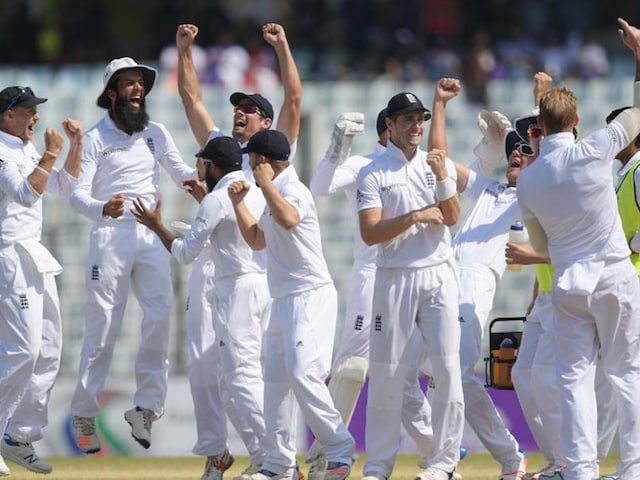 England's misfiring top-order will be under pressure to deliver in the second and final Test against Bangladesh starting Friday, aware their places could be up for grabs when the team moves on to India.

After winning the nail-biting first Test in Chittagong by just 22 runs on Monday, the tourists will be keen to extend their 100 percent record against their hosts when they face off again in the capital Dhaka.

England's win in Chittagong was due in large part to the batting heroics of the middle order, with Moeen Ali, Jonny Bairstow and Ben Stokes all playing crucial knocks to repair the damage from top-order collapses.

Their failures were all too familiar and underlined how England have struggled to make solid starts in a startling number of recent Tests.

Ballance's place is particularly vulnerable given that he has made just two half-centuries in his last 10 Tests, while Duckett will be desperate to make his mark after scores of 14 and 15 on his debut in Chittagong.

Even the normally prolific Cook and Root have been stuttering, with both men each having scored a solitary half-century in their last six innings.

England coach Trevor Bayliss made clear he was expecting more from the top order, who all struggled against spin in Chittagong, while indicating that he will keep faith with them in Dhaka.

"I don't think there's any reason to change the top six at this stage," Bayliss told reporters.

"The top four guys found it very difficult against the new ball facing the spinners... on a wicket which sometimes bounced up around your shoulder and sometimes skidded straight through. I'm sure all the batters will be better for it."

Former England captain Nasser Hussain is among the voices calling for Ballance to make way, with the likes of big-hitting Jos Buttler and the teenage opener Haseeb Hameed waiting in the wings.

Both of them were named on Tuesday in the squad to play five Tests in India on a tour which begins immediately after the Bangladesh series.

Bayliss was also against the idea of using four spinners, something that would be a rare decision for England in a Test match.

With thoughts already turning to the tour against the world's number one Test side, England could also be tempted to hand a debut to left-arm spinner Zafar Ansari.

With Moeen's batting vital to the team, the veteran Gareth Batty is the most likely to miss out if England opt for Ansari given the 39-year-old's lack of potency in Chittagong on his recall after an 11-year absence.

The Dhaka pitch is again expected to turn but Bayliss was cool on the idea of dropping a seam bowler and playing four spinners.

"But it's a bit like playing five pace bowlers on a green seamer. If three or four can't do the job, well..."

Bangladesh's line-up will definitely see changes with 27-year-old Subashis Roy likely to be brought into the side after paceman Shafiul Islam was rested.

Bangladesh have also called up batsman Mosaddek Hossain as backup to Sabbir Rahman, who was suffering from a stomach problem after his valiant innings of 64 in the second innings of the first Test.

Manager Khaled Mahmud told AFP that Sabbir underwent an endoscopy on Wednesday, but it did not reveal any serious problem.

"Hopefully he will be fine before the second Test," said Mahmud.