Stuart Broad called for a repeat of the spirit of Edgbaston 2011 to ensure England manage to overturn South Africa's command of the second Test and series, as their place at the top of the world rankings hangs by a thread. 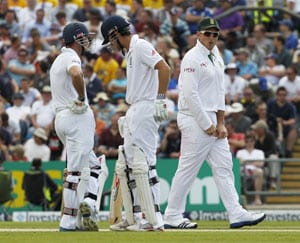 Stuart Broad called for a repeat of the spirit of Edgbaston 2011 to ensure England manage to overturn South Africa's command of the second Test and series, as their place at the top of the world rankings hangs by a thread.

South Africa, who need to win the three-match series to leapfrog England as the No. 1 Test team, scored 419 in their first innings, a total dominated by Alviro Petersen's Test best score of 182, amassed in 533 minutes; painful reading for Alastair Cook, who dropped Petersen on 29 when he failed to hang on to a simple slip chance on the first morning. In reply, England ended the second day of the Headingley Test on 48 for no loss when bad light stopped play with 22 overs left to be bowled.

The batting effort that Broad referred to will need to be reminiscent of the match when England bored India's bowlers into submission with an innings of 710 for seven declared. Cook scored a painstaking 294 on that occasion in 773 minutes. Unfortunately for England, though, there are some marked differences between the two games.

For a start, here they are facing the world's most fearsome pace attack in Dale Steyn, Morne Morkel, Vernon Philander and Jacques Kallis while, with due respect, India's attack was hardly threatening minus an injured Zaheer Khan, a rusty Sreesanth and an over-burdened Ishant Sharma. Further, that surface in Birmingham was frequently referred to as a subcontinent-like pitch, which offered very little to the bowlers other than some occasional uneven bounce. At Headingley, there is more pace and the traditional swing when the clouds hover overhead.

"Being none down for us was vital tonight, and tomorrow morning the first hour will be huge, because we all have one job, and that's to bat as big and as long as we possibly can," said Broad. "We need one of those Edgbaston knocks, 600, and then put South Africa under pressure on the last day.

"I think this wicket will eventually get lower, and that's where the four quick bowlers can come into their own, hitting the pitch, and the ball going underground. There's always that expectation and pressure when you win the toss and bowl, that the opposition team won't get 400. But wicket-wise, I don't think it was that dangerous to bat on," said Broad. "It took a fantastic knock from Petersen, with 180. He played and missed a huge amount, but obviously played fantastically well to get there."

For his part, South Africa's assistant coach Russel Domingo said his team believed they had scored in excess of the par total, which they felt was 330 to 350, and would be happy with a lead of 100.

What England certainly require is a batsman to play with the same patience and skill as Petersen. It is easy to undermine his effort when you consider that he was dropped on 29 and reprieved by two lbw reviews that he requested on 119 and 124, but he batted well, very well.

Petersen clearly had a determination to compensate for the bus he missed at The Oval when his duck stood out as conspicuously as it possibly could in a team score of 637 for two. Hashim Amla made 311 not out, Jacques Kallis 182 not out and Graeme Smith 131 on that occasion. This time, Petersen would not have wanted to miss out or fail to contribute. And he didn't disappoint.

AB de Villiers spoke on Thursday evening of the difficulty facing England's four-man pace attack in the gloom when the ball was bouncing menacingly on a surface that quickened up, and in overcast conditions, created enough lateral movement to trouble the batsmen. So for Petersen to survive that session, and for him to then come through another similarly fraught first hour on the second morning, demonstrated a blend of guts, resilience and skill.

James Anderson and Stuart Broad ensured the first six overs of the day were all maidens. Jacques Rudolph struggled, and it was ironic that having survived that, he was stumped to Kevin Pietersen's second ball, though the call was made by the third umpire.

Petersen was the seventh wicket when he nicked Broad to Matt Prior behind the stumps, though it took an England review to send him on his way.

The total was on 353 at the time, but with Jean-Paul Duminy (49 n.o.) shepherding the tail, South Africa managed to keep England from bowling them out till the end of the second session. Duminy remained unbeaten on 48 when Imran Tahir, the last man, was dismissed by James Anderson for a six-ball duck. But Vernon Philander (13) and Morne Morkel (19) gave Duminy good company prior to that, helping South Africa cross the 400-run mark.

South Africa lead the three-Test series 1-0 after winning the first Test at The Oval by an innings and 12 runs.