Twice an Ashes-winner, Bresnan when fit fills the tricky position of third seamer in a four-man attack and the Yorkshireman played a key role during England's 2010/11 3-1 series win in Australia. 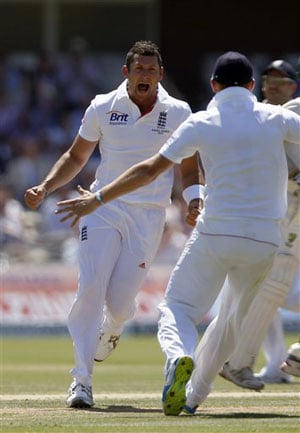 England know the bulk of a squad due to be announced Monday for a tour of Australia that will see them try to win a fourth straight Ashes series for the first time since the 19th Century.

The fact England, who beat arch-rivals Australia 3-0 in a Test series on home soil to retain the urn, rested regular captain Alastair Cook, batsman Ian Bell and bowlers James Anderson, Stuart Broad and Graeme Swann from the subsequent 2-1 one-day series loss was testament to the importance they place on the Ashes.

But while the first-choice XI, with star batsman Kevin Pietersen set to play his 100th Test in November's opener in Brisbane, largely picks itself, the choice of back-up squad members is likely to have led to some prolonged discussions for a selection panel led by ex-England off-spinner Geoff Miller.

One question regards the fitness of bowling all-rounder Tim Bresnan, who missed the fifth Test at The Oval, as well as the one-dayers, with a stress fracture of his back.

Twice an Ashes-winner, Bresnan when fit fills the tricky position of third seamer in a four-man attack and the Yorkshireman played a key role during England's 2010/11 3-1 series win in Australia.

Someone else who starred in that series, after replacing Steven Finn in Perth, is Surrey fast bowler Chris Tremlett, whose career has been blighted by several injuries.

But so too does former Ireland international Boyd Rankin who impressed for his adopted country during the one-day series as did all-rounder Ben Stokes, also uncapped at Test level.

"Boyd is 6ft 10in or something, a huge man, and he bowls at a good rate of knots. We tend to like our tall fast bowlers. Going to Australia, playing on those wickets, those attributes are important.

"Ben is someone who has been on the radar for a couple of years. I think he's a really exciting cricketer," former left-arm spinner Giles, an Ashes-winner as a player in 2005, added.

England face awkward decisions with regards to both a second spinner and a reserve wicketkeeper.

Monty Panesar had provided slow bowling back-up to Swann on recent England tours but the left-armer's erratic behaviour -- he was effectively sacked by Sussex this season after urinating on a nightclub bouncer -- has caused alarm among coach Andy Flower's staff.

In Panesar's favour is the hapless Test debut of Lancashire left-arm spinner Simon Kerrigan at The Oval but England could opt for off-spinner James Tredwell, deployed in one-dayers when Swann is unavailable.

If England want a left-arm spinner who isn't Panesar then international exile Samit Patel reminded them of his ability by taking three wickets for 21 runs in Nottinghamshire's 40-over final win against Glamorgan at Lord's on Saturday.

What happens to the England Test wicketkeeper's position should the reliable Matt Prior be injured remains a thorny issue.

Neither Jos Buttler, England's one-day gloveman, nor middle-order batsman and occasional Yorkshire keeper Jonny Bairstow have much first-class experience behind the stumps.

Should England want a 'spare' batsman, they may recall Nick Compton who has been on the outside looking in since being ousted as a Test opener by Joe Root.