Troubled England star Kevin Pietersen suffered another blow on Sunday as the controversial batsman was dismissed for a golden duck just hours after more damaging allegations emerged about the text message row that threatens to end his international career. 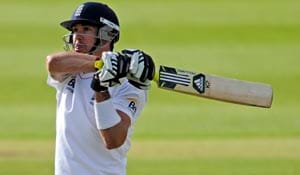 Troubled England star Kevin Pietersen suffered another blow on Sunday as the controversial batsman was dismissed for a golden duck just hours after more damaging allegations emerged about the text message row that threatens to end his international career.

Pietersen lasted just one ball on his return to action for Surrey in his first county match since being dropped by England for the on-going final Test against South Africa.

The 32-year-old was axed after sending what he described as "provocative" texts to South African players during the second Test at Headingley that are believed to have contained criticism of English captain Andrew Strauss and coach Andy Flower.

South African-born Pietersen must have hoped to show England what they were missing with a big score in Sunday's 40-over match against his former county Hampshire at Southampton.

So he would have been sorely disappointed to squander the opportunity in such embarrassing fashion.

To make matters worse, Pietersen was bowled by left-arm spinner Liam Dawson after struggling so often against that type of opponent while on England duty.

It was another blow to Pietersen's ego ahead of a crucial week.

He is due to meet Strauss after the conclusion of the Lord's Test in a bid to repair their fractured relationship and salvage his England future.

But that meeting is likely to be even more uncomfortable for Pietersen after reports on Sunday that his texts to the South Africans contained tactical advice on how to dismiss Strauss.

It is claimed Pietersen told South Africa pace bowler Dale Steyn that Strauss was vulnerable to deliveries from around the wicket.

Pietersen has apologised for the texts without specifying their content, but former England and Wales Cricket Board chairman Lord MacLaurin told the BBC on Sunday that if the allegations are proven, Pietersen will likely not play for England again.

"I think the Kevin Pietersen thing is pretty sad and pretty serious for cricket, the ECB are capable of dealing with the matter as they see fit," Lord MacLaurin said.

"If the reports in the papers are true... I think Mr Pietersen will never play for England again."

Comments
Topics mentioned in this article
Cricket England Cricket Team Michael Clarke Eoin Morgan Andrew Strauss Andy Flower Kevin Pietersen Ian Bell
Get the latest updates on ICC T20 Worldcup 2022 and CWG 2022 check out the Schedule, Live Score and Medals Tally. Like us on Facebook or follow us on Twitter for more sports updates. You can also download the NDTV Cricket app for Android or iOS.