The Cricket Association of Bengal will seen the BCCI's permission to print the tickets. This comes as part of extensive plans for Sachin Tendulkar's 199th Test in Kolkata, including inviting Brian Lara. 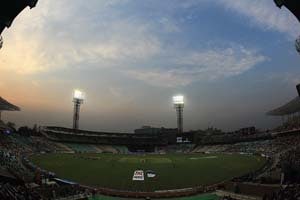 The Cricket Association of Bengal (CAB) will be seeking permission of the Indian Cricket Board so that they can have a photograph of Sachin Tendulkar on match ticket that will be printed on the occasion of penultimate Test of the legendary batsman's illustrious career.

CAB joint secretary Subir Ganguly and treasurer Biswarup Dey said that the state association has thought about such a move as Tendulkar plays his 199th at the historic Eden Gardens from November 6-10. (Also read: Ganguly urges Kolkata fans to come out in large numbers)

"Normally, we don't have the practice of printing any particular cricketer's photograph in a match ticket. But this is a special and emotional occasion as well. Therefore we would like to seek BCCI's permission if we can use any action photograph of Tendulkar at the Eden Gardens. Once we get the permission, we will issue print order," Dey told PTI on Thursday. (Suggested read: Eden promises to make Sachin Tendulkar's 199th 'extra special')

"It will be like a collector's item for all those who get hold of one ticket. It gives you a feeling of "I was there on that day". We are waiting for confirmation of what will be scheduled start, 9:15 am or 9:30 am as sun sets quickly in the eastern part. Once broadcasters confirm that, we would put tickets up for sale," Dey informed.

Since the CAB headquarters was closed due to Durga Puja, there hasn't been any elaborate meeting of the members but it is learnt that key components of a grand felicitation will be decided by association president Jagmohan Dalmiya.

"The final decision on how we would felicitate Sachin will be taken by Mr Dalmiya. We will decide something concrete by the end of next week," Ganguly informed.

The CAB is also planning to invite the legendary Brian Lara to watch the match.

Comments
Topics mentioned in this article
Cricket Sachin Ramesh Tendulkar Eden Gardens
Get the latest updates on ICC T20 Worldcup 2022 and CWG 2022 check out the Schedule, Live Score and Medals Tally. Like us on Facebook or follow us on Twitter for more sports updates. You can also download the NDTV Cricket app for Android or iOS.