The Zimbabwean has been under fire in recent times. Former Test batsman and now BCCI interim president (IPL affairs) Sunil Gavaskar wanted Duncan Fletcher out after India's poor showing on the tours of South Africa, New Zealand and Asia Cup. 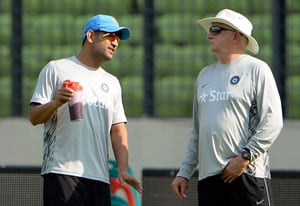 Although the cricket Board has not made a formal announcement, it is learnt from media reports that Duncan Fletcher will continue as Team India coach till 2015 World Cup. Not only Fletcher, the support staff of Joe Dawes (bowling coach) and Trevor Penney (fielding coach) will also stay on.Â  (Team India need a younger coach: Gavaskar)

Fletcher, who was England's first foreign coach, has been vehemently criticized in recent weeks. Sunil Gavaskar, the former Test opener and now the Supreme Court-appointed interim president of the BCCI's Indian Premier League affairs, was the most vocal. Gavaskar suggested that Rahul Dravid was the best man to take charge. Dravid was quick to indicate that he was not available. (Gavaskar appointed BCCI interim chief)

BCCI secretary Sanjay Patel indicated in the media that Fletcher and Co. have the Board's backing and there was no question of removing them now.

"Let me set the record straight. Duncan Fletcher has the wholehearted backing and support of BCCI. There has been no discussion on his removal. We told him that we have a lot of faith in his coaching abilities and he should not be worried about anything else," BCCI secretary Patel had said few weeks ago. The decision had the blessing of the most important man in Indian cricket, N. Srinivasan.