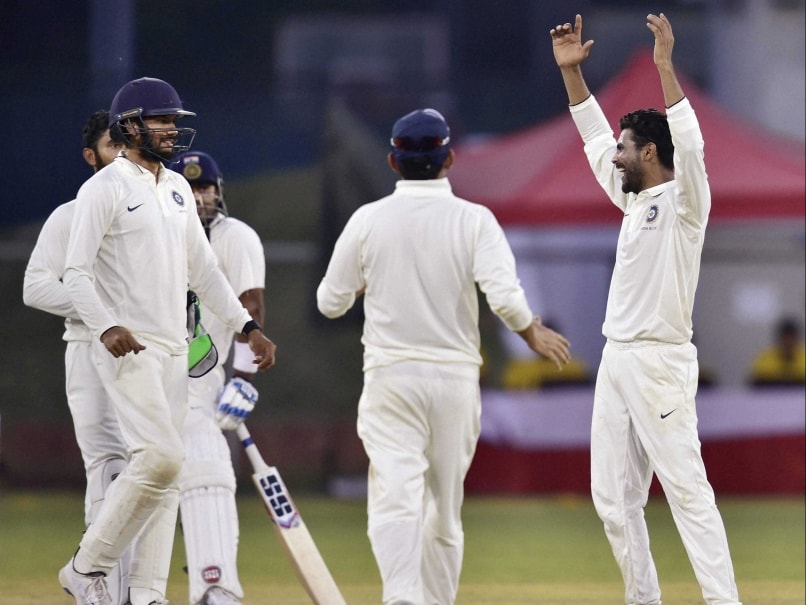 India Blue inched closer to clinch the Duleep Trophy tournament after taking a massive337-run lead in the first innings against India Red on the penultimate day of the summit clash at the Greater Noida Sports Complex Ground on Monday.

Left-arm spinner Ravindra Jadeja's immaculate bowling not only earned him five wickets but also helped the India Blue side restrict India Red to just 356 in their first essay.

Resuming the day at 16/2, India Red crumbled under pressure despite some brave knocks from Gurkeerat Singh Mann (57) and Stuart Binny (98).

Leg spinner Amit Mishra also entertained the crowd, scoring 65 while chinaman Kuldeep Yadav got 59 to offer some resistance after skipper Yuvraj Singh (17), Shikhar Dhawan (29) and Abhinav Mukund (2) failed to put up a fight.

After deciding not to enforce the follow-on, India Blue ended the day on 1 for 0 in their second essay.

Both Yuvraj and Dhawan started cautiously but fell in quick succession to leave the team reeling before Gurkeerat and Binny fought back, each registering a fifty. The right-handed duo managed to add 63 runs for the fifth wicket before the Punjab batsman was undone by a beauty from Jadeja.

Left out of the Test squad earlier in the day, for the three matches against New Zealand, Binny went on to prove the selectors a point, by stitching another solid stand with Ankush Bains (16), worth 63, to keep the team moving forward.

Binny, looking for his first first-class ton since 2014, fell two short of a well deserved century when he was trapped in front by Jadeja.

With the team tottering, Mishra and Yadav frustrated the India Blue bowlers with a 86-run partnership, the highest stand of the innings. But Mishra fell with eight overs to go in the day, caught at long-off trying to slog Karn Sharma while Yadav departed soon after as the India Red team's innings folded at 356.

Despite a massive lead, Gambhir surprised one and all by walking into the middle along with fellow opener Mayank Agarwal as the duo remained unbeaten on 1/0 when stumps were drawn for the day.

Comments
Topics mentioned in this article
Ravindra Jadeja Gurkeerat Singh Stuart Binny Shikhar Dhawan Abhinav Mukund Yuvraj Singh Amit Mishra Gautam Gambhir Cricket
Get the latest updates on IPL Auction 2023 and check out  IPL 2023 and Live Cricket Score. Like us on Facebook or follow us on Twitter for more sports updates. You can also download the NDTV Cricket app for Android or iOS.