Kuldeep Yadav, whose stock delivery is the wrong 'un, was able to deceive India Green batsmen with his dip and drift 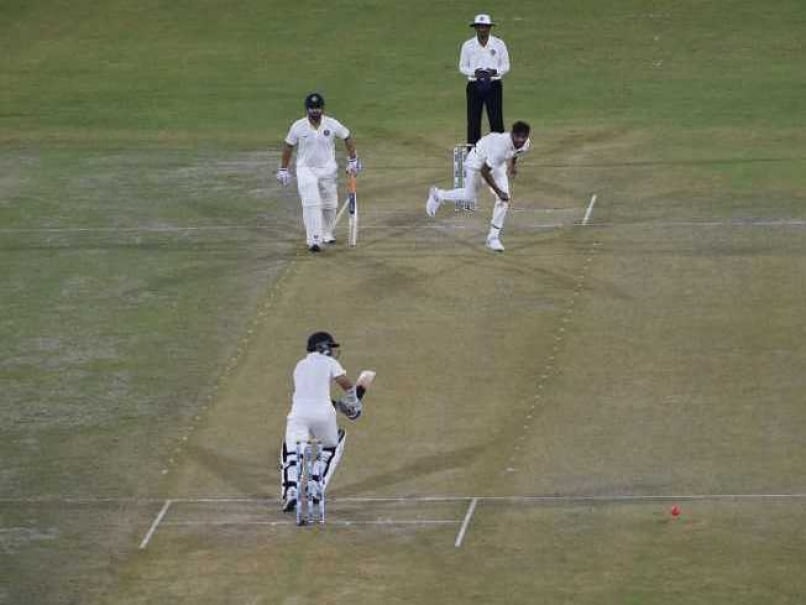 India Red have set a target of 497 to India Green for winning the match.© AFP

Young chinaman bowler Kuldeep Yadav kept the opposition batsmen on tenterhooks with a maiden five wicket haul as he took India Red on the cusp of an outright victory against the Green team in the inaugural Day/Night Duleep Trophy encounter on Thursday.
Â Â Â  Â
Chasing a mammoth victory target of 497, the Green team was tottering at 217/7 at the end of penultimate evening with another 280 runs to win the match. Suresh Raina was at the crease batting on 35.

The Red team scored a commendable 486 in their first innings riding on twin hundreds from Abhinav Mukund (169) and Sudip Chatterjee (114). However the score reached close to 500 due to Gurkeerat Singh Mann's brisk 82 off 96 balls. The third evening certainly belonged to Kuldeep who troubled all the batsmen with his deception.

He ended with figures of 5/55 in 13 overs. The pink Kookaburra did not lose its shine and there wasn't much turn on offer. But Kuldeep, whose stock delivery is the wrong 'un, was able to deceive the batsmen with his dip and drift. Opener Jalaj Saxena (26) played on trying to a cut an Ishwar Pandey delivery after a brisk 66 run opening stand with Robin Uthappa, who blazed his way to a 72 off 66 balls. His innings had 10 fours and a down the ground six off Akshay Wakhare.

Uthappa looked in good touch as he got some flowing straight drives of pacers especially Anureet Singh. He added 56 for second wicket with Parthiv Patel (21) who had a forgettable outing infront and behind the stumps. India Green, who were cruising along at 122/1, slumped to 131/4 as Kuldeep shared three wickets with addition of nine runs. First to go was Uthappa as he tried to play forward and was foxed by the drift. The ball turned away from him to take an outside edge with Yuvraj pouching onto a low catch at first slip. Then it was Rajat Paliwal (0) who was adjudged leg before to a delivery that broke back to catch him on the backfoot. Parthiv was done in by the dip as he remained inside the crease and was hit on the back leg.

Skipper Raina and Saurabh Tiwary (31) had a partnership of 54 runs for the fifth wicket before the burly Jharkhand batsman misjudged the length as he was rooted to crease to be trapped plumb in-front. Kuldeep completed a well deserved five-for when he got Sandeep Sharma (0) bowled with a delivery that came in.

Earlier Mukund added only seven runs to his overnight 162 not out before being caught by Tiwary off Dinda. But Gurkeerat scored at a fair clip as he was instrumental in taking Reds closer to 500. He hit 13 boundaries and a six. Leg spinner Shreyas Gopal was most successful Green bowler with 5/123.

Comments
Topics mentioned in this article
Abhinav Mukund Robin Uthappa Nathu Singh Suresh Raina Saurabh Tiwary Ishwar Pandey Gurkeerat Singh Cricket
Get the latest updates on India vs South Africa and check out  Schedule, Results and Live Score. Like us on Facebook or follow us on Twitter for more sports updates. You can also download the NDTV Cricket app for Android or iOS.