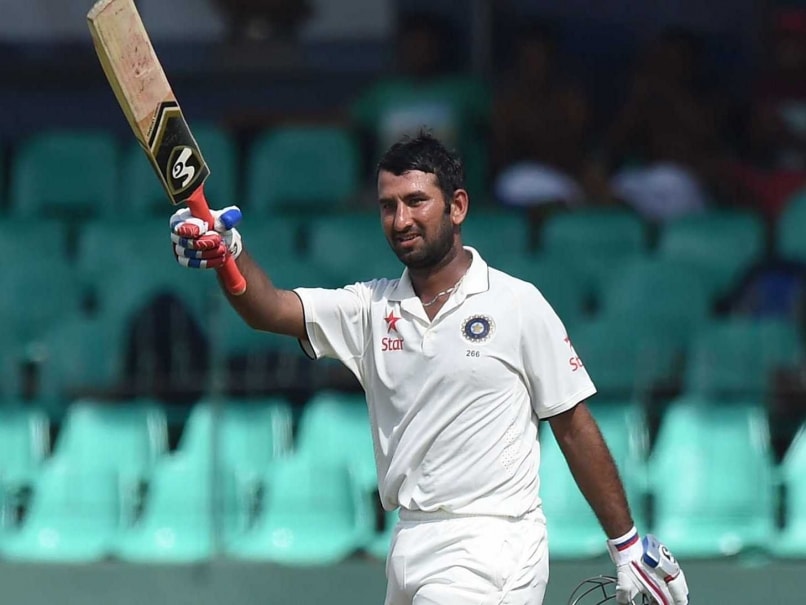 Cheteshwar Pujara displayed his appetite for big score with a superlative unbeaten 256 as India Blue piled up a mammoth 693/6d in their bid to outbat the Reds on the second day of the Duleep Trophy final.

The pressure due to mountain of runs was telling as Pankaj Singh's sharp first resulted in Reds losing Abhinav Mukund (0) and Sudeep Chatterjee off successive deliveries.

The day again belonged to Pujara, who is known for scoring "Daddy Doubles" in domestic cricket as he faced 363 balls, hitting 28 boundaries in the process.

He got an ideal partner in Sheldon Jackson, who smashed 134 off 204 balls with 15 boundaries and two huge sixes. Incidentally like Pujara, Jackson had also scored hundred in the last game.

The Saurashtra duo added 243 runs for the fifth wicket after Dinesh Karthik (55) failed to add to his overnight tally.

Gambhir's ploy to tire out the opposition just like the earlier match again worked as Yuvraj Singh's bowlers were way off the mark. On a flat deck where the skipper would have reckoned that his spinners would come into play was in for huge disappointment.

Both being wrist spinners also compounded the worries for Red team as they bowled a lot of short balls not being able to hit the length.

Mishra's age old problem of being slow through the air added to his woes as Jackson looted runs attacking him with great fervour. He paddle swept Mishra to bring up his 11th first class hundred and then lofted the leggie over long on for a six.

Pujara continued calmly at the other end as he brought up his double hundred with an on drive off Yadav.

The duo added runs at an average of four runs per over. While the ball had wear and tear due to flat surface, neither Nathu Singh nor Pradeep Sangwan could reverse the ball.

Finally when Mishra got Jackson, the Blues were past 600 run mark. But Gambhir in his bid to make a statement sent in Ravindra Jadeja who hit merrily for his 48 off 66 balls entertaining the Sunday crowd as Pujara reached 250 with a boundary off Abhinav Mukund.

Mukund finally got Jadeja as Gambhir declared the innings. Having fielded for 168.2 overs, Mukund got a delivery from Pankaj that cut back and kept low to wrap him on pads. Sudeep hardly moved his feet to another incoming delivery to be played on.

Comments
Topics mentioned in this article
Cheteshwar Pujara Yuvraj Singh Dinesh Karthik Gautam Gambhir Shikhar Dhawan Pankaj Singh Cricket
Get the latest updates on IPL Auction 2023 and check out  IPL 2023 and Live Cricket Score. Like us on Facebook or follow us on Twitter for more sports updates. You can also download the NDTV Cricket app for Android or iOS.