Former ICC and BCCI President Sharad Pawar feels there is enough talent in India to make world class players for the future. 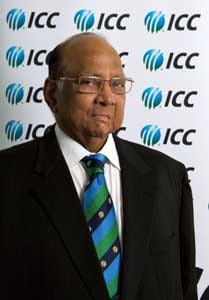 Indian cricket is enduring one of its worst phases right now but former ICC and BCCI President Sharad Pawar feels the talent pool has never been wider even though it would take some time for the upcoming players to become world-class.

The Indian team succumbed to Test whitewashes against England and Australia before being humiliated at home by the former.

The team most recently lost 1-2 in a short ODI series against Pakistan and there are question marks about the way forward after retirements by Test greats such as Rahul Dravid and VVS Laxman.

But Pawar feels the talent pool is huge enough even though youngsters such as Rohit Sharma and Ravindra Jadeja have not quite lived upto the promise.

"There are a lot of youngsters. Once upon a time, there were certain good areas which traditionally supplied good talented players like Mumbai, Chennai and Bangalore. But that is not the case today," Pawar told PTI.

"Uttar Pradesh is providing quality players, Jharkhand is also providing. Now, we are getting talent from throughout India. It will take time to shape them as good players. I don't think there is shortage of players," he said.

Comments
Topics mentioned in this article
Cricket Jagmohan Dalmiya
Get the latest updates on ICC T20 Worldcup 2022 and CWG 2022 check out the Schedule, Live Score and Medals Tally. Like us on Facebook or follow us on Twitter for more sports updates. You can also download the NDTV Cricket app for Android or iOS.