Disgraced former Pakistan captain Salim Malik on Thursday said he has applied for the job of national batting coach, insisting he is not barred after a court lifted his life ban four years ago. 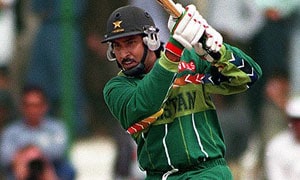 Disgraced former Pakistan captain Salim Malik on Thursday said he has applied for the job of national batting coach, insisting he is not barred after a court lifted his life ban four years ago.

Malik, 49, was banned by Pakistan Cricket Board (PCB) in 2000 after a judicial inquiry conducted by Justice Malik Mohammad Qayyum found him guilty of offering bribes to Australian players to lose.

Australian trio Shane Warne, Tim May and Mark Waugh alleged Malik offered them huge sums to underperform during their team's tour to Pakistan in 1994.

Malik, who always pleaded his innocence, was also named in an inquiry conducted by India's Central Bureau of Investigation, which led to life bans on their captain Mohammad Azharuddin and Ajay Jadeja.

The ban on Malik was lifted by a court in Lahore in October 2008, but the decision has not been endorsed by the International Cricket Council (ICC), which reportedly blocked his appointment to the PCB academy in Lahore in 2008.

Malik, a stylish batsman in his day, now claims that he is cleared of all fixing charges.

"I am cleared and my life ban was lifted four years ago," Malik told reporters after submitting his application with the PCB.

"I am cleared by the PCB and the ICC so I can now be involved in any cricket related activity."

PCB earlier this month advertised the post of batting coach in an attempt to overcome the national team's frailties, which let them down in major events like the 2011 World Cup and World Twenty20 in Sri Lanka this month.

During an illustrious career, Malik scored 5768 runs in 103 Tests and 7170 runs in 283 one-day internationals and said he could help improve Pakistan's batting.

The fact he does not have a level III coaching qualification, as required by the PCB, has not put him off.

"A Test cricketer like me doesn't need any coaching course or any certificate," he insisted.

"I have the ability to help the batsmen overcome their problems which have been the main hurdle in team's performance."

Comments
Topics mentioned in this article
Cricket Mohammad Azizuddin Azharuddin Ajaysinhji D. Jadeja
Get the latest updates on T20 World Cup, check out the T20 World Cup Schedule and Live Score . Like us on Facebook or follow us on Twitter for more sports updates. You can also download the NDTV Cricket app for Android or iOS.