Baroda skipper Ambati Rayudu employed defensive field setting to cut down on the boundaries but the Delhi batsmen especially Mohit showed a lot of character during his 154-ball innings in which he hit seven fours. 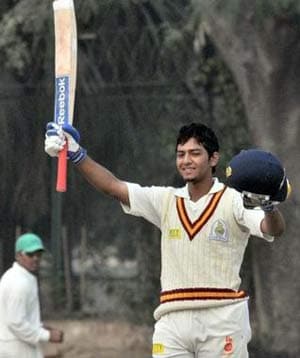 Delhi fought hard through fifties from Mohit Sharma and Unmukt Chand but the hosts still have a daunting task of scoring 347 more runs for a first innings lead against Baroda, who put on a massive 561 in their Ranji Trophy match on Monday. (File Photo of Unmukt Chand)

At stumps on the third day, Delhi were 215 for three with the 20-year-old Mohit scoring 71 and the talented Unmukt Chand contributing 51.

At the crease are seasoned pros Mithun Manhas, who looked solid on 41, and Rajat Bhatia on 9.

Delhi now need 347 more runs in order to get three points from the game on the final day on Tuesday which promises to be an intriguing one.

Baroda skipper Ambati Rayudu employed defensive field setting to cut down on the boundaries but the Delhi batsmen especially Mohit showed a lot of character during his 154-ball innings in which he hit seven fours.

He enjoyed two useful partnerships -- of 87 runs for the second wicket with Unmukt and 78 for the third wicket with Manhas. The left-hander was impressive against the spinners and when the field was opened up, he was taking some quick twos to keep the scoreboard moving.

Just when it looked that the youngster will reach his maiden first-class century, he was trapped leg before by Firdaush Bhaja.

Unmukt also looked good during his innings in which he hit some lovely cover drives including one off Bhaja which was a treat for the eyes. He hit six fours in all but was bowled by left-arm spinner Bhargav Bhatt failing to read the turning delivery.

A lot was expected of skipper Shikhar Dhawan as he raced to 30 off only 33 balls with four boundaries but he mistimed a pull-shot when Murtuza Vahora bowled a bouncer. The ball ballooned up and he was caught in the square leg region.

As of now, Delhi's hopes rest on the shoulders of Mithun Manhas who has been in good form this season.

Earlier, Baroda batted around 10 overs in the morning to take their score from 525 for seven to 561 all-out. The two overnight not out batsmen Ketan Panchal and Gagandeep Singh Natt were dismissed for individual scores of 80 and 76 respectively.

National selector Saba Karim has been present throughout all three days and the former India wicketkeeper will certainly be pleased with effort of Parvinder Awana who took 4/104 in 37 overs.

Delhi coach Vijay Dahiya said that they would take a call on the chase after lunch tomorrow.