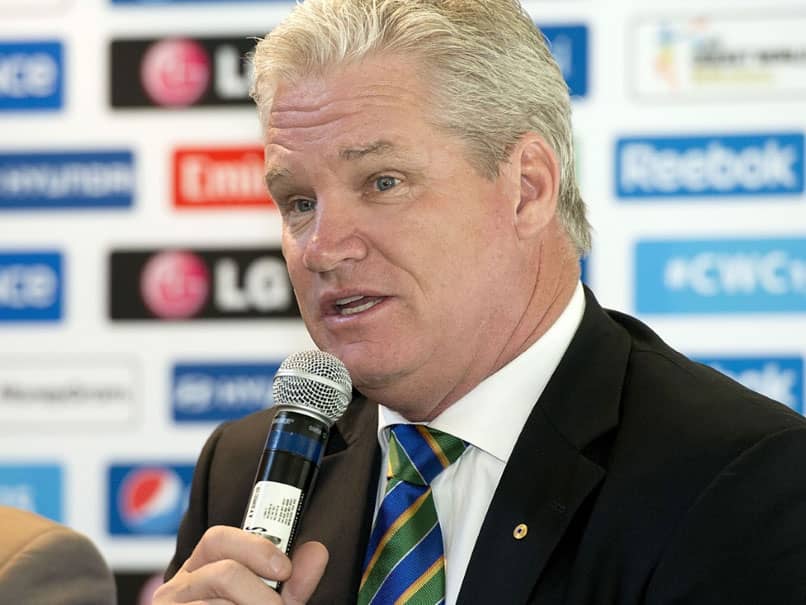 Dean Jones' untimely death has resulted in shock amongst the sports fraternity.© AFP

Former Australia cricketer Dean Jones died of a heart attack in a Mumbai hotel on Thursday, shocking many in the cricket fraternity. Even after his playing career, Jones had a huge fan following as a commentator and analyst. India captain Virat Kohli and head coach Ravi Shastri were among many who took to social media to pay their tributes to Dean Jones. "Shocked to hear about the tragic loss of Dean Jones. Praying for strength and courage to his family and friends," Kohli tweeted.

Shocked to hear about the tragic loss of Dean Jones. Praying for strength and courage to his family and friends.

"Really shocking to lose a colleague and a dear friend - Dean Jones. Gone so young. Condolences to the family and may his soul rest in peace #RIPDeanJones @cricketcomau," tweeted India head coach Shastri, who had also played in the historic tied Test in Chennai in 1986, where Jones had scored a double-century.

Virender Sehwag further expressed shock following the news, hailing Jones as one of his favourite commentators. "Saddened to hear the news of Dean Jones passing away. Still cannot believe it. Was one of my favourite commentators, he was on air in many of my landmarks. Had really fond memories with him. Will miss him," he added.

Really shocking to lose a colleague and a dear friend - Dean Jones. Gone so young. Condolences to the family and may his soul rest in peace #RIPDeanJones - @cricketcomau pic.twitter.com/pckNBow5Sv

Saddened to hear the news of Dean Jones passing away. Still cannot believe it. Was one of my favourite commentators, he was on air in many of my landmarks. Had really fond memories with him. Will miss him. pic.twitter.com/FZBTqIEGdx

Absolutely devastated to hear about the demise of Dean Jones. A colossal loss to the cricketing community. His connection to Chepauk will always be cherished. Deepest condolences to his family and friends. May his soul rest in peace. pic.twitter.com/mDHO0d76d0

I'm deeply shocked and saddened by the demise of our fellow commentator #DeanJones He was fine in the morning. I had video call with his son two days back. Everything was fine. Everything was normal. I can't believe this #RIP

I just wish this wasn't true. So shocked and heartbroken to hear about the death of Dean Jones cannot believe this

We will miss you & your voice, Professor.

In complete shock to hear about Dean Jones sad passing. One of a kind you were Deano and how lonely and helpless you must have felt on your own in that hotel room-a death we commentators fear the most, and likely to meet, helpless and gone in that hotel room...RIP my friend.

Can't believe it. Extremely sad to hear the untimely passing of Dean Jones. My heart goes out to his family. Sad day for cricket world.#RIPDeano pic.twitter.com/gUoZgVYNyg

Absolutely heartbreaking news about Dean Jones passing away.
A wonderful soul taken away too soon. Had the opportunity to play against him during my first tour of Australia.
May his soul rest in peace and my condolences to his loved ones. pic.twitter.com/u6oEY1h7zz

Tragic news. Rest in Peace, Professor. My condolences to the family of Dean Jones.

Shocked to hear Deano is no more. His innovative batting and his professorial analysis in studio were always such a joy to watch. He was so full of life. Will miss watching him on TV and talking cricket with him. RIP #DeanJones

Absolutely Shocking..and hardly are u hearing anything nice and pleasant anywhere this year... #DeanJones may his soul merge with light and attain Sadgati ..absolutely numbing news

MCC are very sad to hear of the passing of Honorary Life Member, Dean Jones.

Our thoughts are with his friends and family. pic.twitter.com/e3tFPbfBSb

We are extremely shocked and sad to learn of the untimely demise of Mr. Dean Jones. His energy and enthusiasm for the game will be truly missed. Our thoughts with his family, friends and his followers in this hour of grief. pic.twitter.com/gAAagImKeC

Deeply saddened to hear about the sudden demise of one of the greatest ambassadors of cricket, #DeanJones.

Our thoughts and prayers are with his family during this difficult time. pic.twitter.com/Kp84RR3VcD

Awful to hear the news of Dean Jones passing away in Mumbai. He was a wonderful player for Australia and he will be missed. My thoughts are with his family. RIP Deano https://t.co/AmVhQiNEe2

Team India opener Rohit Sharma has also expressed his shock on Twitter. "Shocking news to hear about passing away of Dean Jones #RIP," he said.

Jones played 52 Tests for Australia and scored 3631 runs at an average of 46.55 with 11 centuries and is considered among the top cricketers to come out of that nation.